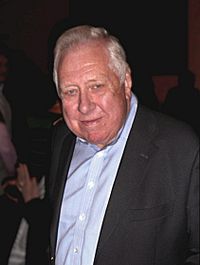 Roy Sydney George Hattersley, Baron Hattersley, PC, FRSL (born 28 December 1932) is a British Labour politician, author and journalist. He was born in Sheffield, England. He was MP for Birmingham Sparkbrook for 33 years from 1964 to 1997. He was Deputy Leader of the Labour Party from 1983 to 1992 during the Neil Kinnock leadership.

Hattersley retired from the House of Lords on 19 May 2017.

All content from Kiddle encyclopedia articles (including the article images and facts) can be freely used under Attribution-ShareAlike license, unless stated otherwise. Cite this article:
Roy Hattersley Facts for Kids. Kiddle Encyclopedia.