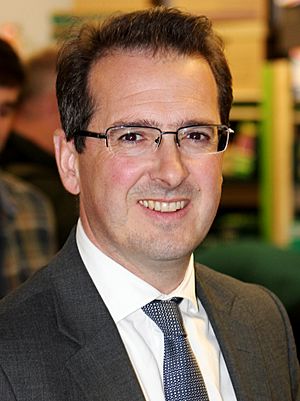 Owen Smith (born 2 May 1970) is a British Labour Party politician. He has been the Member of Parliament for Pontypridd in Wales since 2010. In July 2015 he challenged Jeremy Corbyn for the leadership of the Labour Party. Before he became an MP he worked for the BBC and as a lobbyist for Pfizer, a company that makes drugs or pharmaceuticals.

All content from Kiddle encyclopedia articles (including the article images and facts) can be freely used under Attribution-ShareAlike license, unless stated otherwise. Cite this article:
Owen Smith Facts for Kids. Kiddle Encyclopedia.