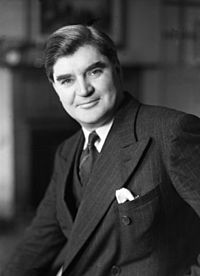 Aneurin "Nye" Bevan PC (15 November 1897 – 6 July 1960) was a Welsh Labour politician. He is known for leading the creation of the National Health Service (NHS) to give medical care free at point-of-need to all Britons. He first became an MP for Ebbw Vale in 1929. He served as Deputy Leader of the Labour Party from 1956 to 1959 and was Shadow Foreign Secretary from 1959 until his death in 1960. Under Prime Minister Clement Attlee, Bevan was Minister of Health (1945–1951) and Labour and National Service (1951).

Bevan was born in Tredegar, Monmouthshire. He married Scottish-born fellow Labour politician Jennie Lee in 1934. He was a humanist.

On 6 July 1960, Bevan died of stomach cancer in Chesham, Buckinghamshire. He was 62.

All content from Kiddle encyclopedia articles (including the article images and facts) can be freely used under Attribution-ShareAlike license, unless stated otherwise. Cite this article:
Aneurin Bevan Facts for Kids. Kiddle Encyclopedia.