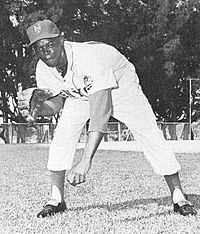 Alvin Neill Jackson (December 26, 1935 – August 19, 2019) was an American left-handed pitcher in Major League Baseball. He played from 1959 to 1969. His 43 wins with the New York Mets were the franchise record until 1969. He was born in Waco, Texas. He also played for the Pittsburgh Pirates, the St. Louis Cardinals and the Cincinnati Reds.

All content from Kiddle encyclopedia articles (including the article images and facts) can be freely used under Attribution-ShareAlike license, unless stated otherwise. Cite this article:
Al Jackson Facts for Kids. Kiddle Encyclopedia.