Cameron Park Zoo is a 52-acre (21 ha) natural habitat zoo located within Cameron Park in the city of Waco, Texas, United States, next to the Brazos River. Established in July 1993, Cameron Park Zoo has lush native vegetation that surrounds splashing waterfalls, a picturesque lake, and ponds. And in the midst of all this beauty, visitors see that the wild ones not only survive in their natural habitat, but they also flourish. The zoo features a diverse collection that includes over 1731 animals, representing 300 species from around the world. 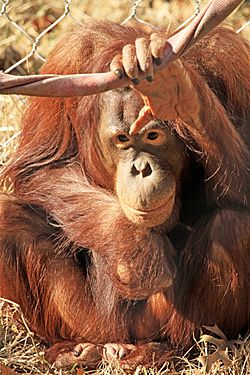 Initially established in 1955 as the Central Texas Zoological Park by a group of wildlife enthusiasts who wanted to create an area for recreation and education opportunities.

The Cameron Park Zoo features species from North and South America, Africa, Asia and Europe. Including a large reptile house, an African lion display, and Lemur Island, a large open lemur habitat. In 2005, a large new area was opened called the Brazos River Country, featuring a 50,000-US-gallon (190,000 l) saltwater reef aquarium, a large swampland habitat, and many other native Texas type habitats, featuring numerous species found within the state. The exhibit is so large, it nearly doubled both the animal population and the overall size of the zoo. In 2009, the zoo added the Asian Forest, expanding its collection to include endangered species such as orangutans and Komodo dragons. These species joined the Sumatran tigers in the Asian Forest. 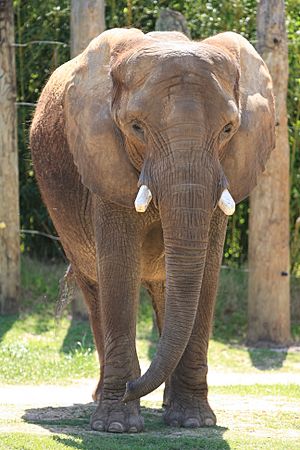 Elephant in habitat at Cameron Park Zoo in Waco, Texas.

Cameron Park Zoo is located with Cameron Park. Cameron Park covers 416 acres (168 ha), and is one of the largest undeveloped municipal parks in Texas. It is located at the intersection of the Bosque River and Brazos River. Situated in Waco's Cameron Park, the zoo enjoys lush native vegetation and adjoins nearby limestone cliffs, which provide an excellent view of Waco.

All content from Kiddle encyclopedia articles (including the article images and facts) can be freely used under Attribution-ShareAlike license, unless stated otherwise. Cite this article:
Cameron Park Zoo Facts for Kids. Kiddle Encyclopedia.