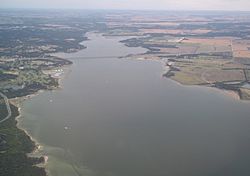 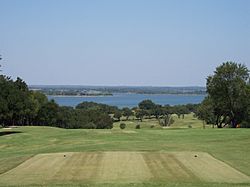 Lake Waco is a reservoir located within the city limits of Waco, in McLennan County, Texas, which serves as the western border for the city of Waco. The dam is located on the Bosque River. The lake has 79,000 acre feet (97,000,000 m3) of water and is currently run by the Army Corps of Engineers. Lake Waco top of conservation pool was raised about 8 feet (2 m) in 2005. This has helped with fishing.

The flood threat to the city of Waco and downstream portions of the Brazos River - combined with the need for conservation storage to save millions of gallons of water that were wasted, led local citizens to seek a new reservoir. Through their efforts, Congress authorized the project for construction by the Corps of Engineers.

By law, local interests are required to bear the cost of acquisition of the storage allocated to conservation in the reservoir. A water conservation contract covering repayment of the cost of those features has been approved, and, under its terms, the Brazos River Authority will also contribute its share annually for operation and maintenance of the project.

Waco Lake is operated for its various purposes by the Corps of Engineers, with water being furnished to the Authority under the term by the Texas Water Commission

All content from Kiddle encyclopedia articles (including the article images and facts) can be freely used under Attribution-ShareAlike license, unless stated otherwise. Cite this article:
Lake Waco Facts for Kids. Kiddle Encyclopedia.