The Brazos River Authority or BRA was created in 1929 by the Texas Legislature as a quasi-governmental entity to manage the Brazos River as a water resource in Texas. It was originally named the Brazos River Conservation and Reclamation District and renamed to the current name in 1953. The central office is located at 4600 Cobbs Drive in Waco. 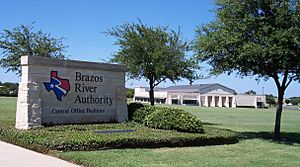 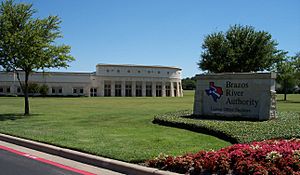 The Authority will also manage the dam that will create Allens Creek Reservoir on Allens Creek, in the event it is ever built.

All content from Kiddle encyclopedia articles (including the article images and facts) can be freely used under Attribution-ShareAlike license, unless stated otherwise. Cite this article:
Brazos River Authority Facts for Kids. Kiddle Encyclopedia.