Tales of a Wayside Inn facts for kids 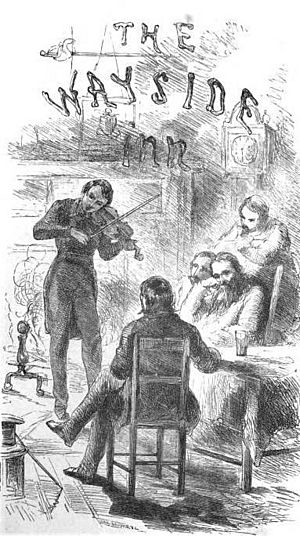 Tales of a Wayside Inn is a book of poems by Henry Wadsworth Longfellow. It was published in 1863. The book is set in a real place. That place was a tavern in Sudbury, Massachusetts. Longfellow lived 20 miles away in Cambridge, Massachusetts. The inn was a favorite place for the people of Cambridge to go. The people in the book were real people, too. They were friends of Longfellow. In the book, they tell stories to each other while visitng the Wayside Inn. The best known poem is "Paul Revere's Ride". It begins: "Listen my children and you shall hear / Of the midnight ride of Paul Revere."

Longfellow wrote the book to help him cope with his wife's death. She died at home. She was standing in front of a fireplace. Her skirt caught fire. Longfellow visited the real tavern in 1862. It was called the Red Horse Tavern at that time. It was closed because the owner had died the year before. Longfellow said it was "a rambling, tumble-down building". Two more books about the Wayside Inn were published. One book was published in 1870, and other in 1872.

All content from Kiddle encyclopedia articles (including the article images and facts) can be freely used under Attribution-ShareAlike license, unless stated otherwise. Cite this article:
Tales of a Wayside Inn Facts for Kids. Kiddle Encyclopedia.