Winthrop is a town in Kennebec County, Maine, United States. The population was 6,092 at the 2010 census. Winthrop's population, however, approximately doubles during the summer months as part-year residents return to seasonal camps located on the shores of Winthrop's Lakes and Ponds. A recreational area located among lakes, the town includes the villages of Winthrop and East Winthrop, and is the center of the Winthrop Lakes Region. Winthrop is included in the Augusta, Maine Micropolitan New England City and Town Area.

Winthrop was part of the Kennebec Purchase awarded by the Plymouth Council for New England. First called Pondtown for its lakes and ponds, it was settled by Timothy Foster in 1765. On April 26, 1771, Pondtown Plantation was incorporated by the Massachusetts General Court as Winthrop, named for the first colonial governor of Massachusetts, John Winthrop. Readfield was set off and incorporated in 1791. The surface of the town is uneven, but with good land that yielded hay, grain and apples. Winthrop became noted for its orchards and cattle.

At the outlet of Maranacook Lake into Annabessacook Lake, John Chandler built a sawmill in 1768, and then added a gristmill. Other industries followed, including a fulling mill, tannery and blacksmith shop. The Winthrop Woolen & Cotton Manufactory was incorporated in 1809, and in 1814 went into operation. By 1886, the town had a sawmill which manufactured about 200,000 feet of lumber every year, two oil cloth factories, a sash and blind factory, and a foundry and machine shop. The Maine Central Railroad opened to the village, carrying freight and tourists. Winthrop and its lakes developed into a summer resort, which it remains today.

Winthrop has historically referred to its regions by directional names. Other than Winthrop Village and East Winthrop, their boundaries are not firmly established and tend to vary from person to person. Winthrop has several villages and areas that can be classified as neighborhoods. Some of them are:

Winthrop is an industrial and suburban center, located about 10 miles west of Maine's capital city, Augusta. Nearly 10% of Winthrop's housing is seasonal. The commercial downtown is situated between Maranacook and Annabessacook Lake.

Winthrop is also home to Mt. Pisgah (pronounced piss-gah, from the Hebrew word for summit or lookout), which is 807 ft above sea level and home to the Maine Fire Services watch tower that was in service from 1949 to 1992, when air patrols rendered it obsolete. The tower still stands to this day and is accessible by a hiking trail.

There are 2,598 households of which 28.2% have children under the age of 18 living with them, 52.3% are married couples living together, 10.1% have a female householder with no husband present, and 33% are non-families. 26.9% of all households are made up of individuals and 9.5% have someone living alone who is 65 years of age or older. The average household size is 2.31 and the average family size is 2.76. 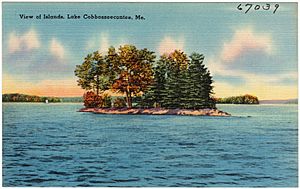 Winthrop is at the center of the Winthrop Lakes Region, which is situated between Lewiston and Augusta, Maine, and centered around six major bodies of water: Androscoggin Lake, Annabessacook Lake, Cobbosseecontee Lake, Echo Lake, Maranacook Lake and Parker Pond, in addition to numerous smaller bodies of water. Besides Winthrop, the region includes the towns of Fayette, Readfield, and Mount Vernon to the north, Manchester to the east, Monmouth to the south, and Wayne to the west. The northern part of Mount Vernon is considered to be part of the Belgrade Lakes Region. The region is a popular recreation area in central Maine, with over three dozen Lakes and ponds offering a variety of boating, hiking, cycling, camping and fishing opportunities. The area is also home to numerous shoreline events, concerts and festivals.

The Winthrop Lakes Region includes the following bodies of water:

*Cobbosseecontee Lake (known locally as Cobbossee) is nationally recognized as one of the top bass-fishing lakes in America due to its impressive largemouth population. Cobbossee also has the only active inland waters lighthouse in Maine, Ladies Delight Light.

All content from Kiddle encyclopedia articles (including the article images and facts) can be freely used under Attribution-ShareAlike license, unless stated otherwise. Cite this article:
Winthrop, Maine Facts for Kids. Kiddle Encyclopedia.