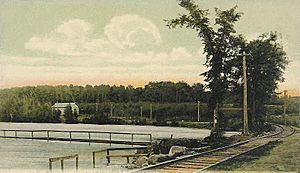 Maranacook Lake is a body of water in Kennebec County, Maine located in the towns of Readfield, Maine and Winthrop, Maine. The lake covers 1,673 acres (677 ha) with a maximum depth of 118 feet (36 m) and a mean depth of 30 feet (9.1 m). It is one of the major bodies of water in the Winthrop Lakes Region.

A popular and historic recreation area and tourist attraction, Maranacook is heavily developed with many summer homes, rental cabins, and year-round residences. Known as one of the cleanest bodies of water in Maine, the lake belongs to the Cobbossee Watershed, and is monitored by the Maranacook Lake Association. The North Basin in Readfield is roughly 700 acres and shallow, with a homothermous quality. The roughly 1,000 acre South Basin in Winthrop is deeper and colder. Maranacook Lake Upper Dam is a recent addition to the area. Constructed in 1995, the concrete dam is found at the southeastern tail of the lake in Winthrop. The dam's creation has helped regulate water levels as well as in associated local bodies of water, and it has slowed erosion on the shores of the lake.

The lake is known for its populations of smallmouth and largemouth bass, and smelt.

The lake is home to the popular day camp in Readfield, Camp KV.

All content from Kiddle encyclopedia articles (including the article images and facts) can be freely used under Attribution-ShareAlike license, unless stated otherwise. Cite this article:
Maranacook Lake Facts for Kids. Kiddle Encyclopedia.