Smelts are a family of small fish, the Osmeridae, found in the North Atlantic and North Pacific Oceans, as well as rivers, streams and lakes in Europe, North America and Northeast Asia. They are also known as freshwater smelts or typical smelts to distinguish them from the related Argentinidae (herring smelts or argentines), Bathylagidae (deep-sea smelts), and Retropinnidae (Australian and New Zealand smelts).

Some smelt species are common in the North American Great Lakes, and in the lakes and seas of the northern part of Europe, where they run in large schools along the saltwater coastline during spring migration to their spawning streams. In some western parts of the United States, smelt populations have greatly declined in recent decades, leading to their protection under the Endangered Species Act. The Delta smelt (Hypomesus transpacificus) found in the Sacramento Delta of California, and the eulachon (Thaleichthys pacificus) found in the Northeast Pacific and adjacent rivers, are both protected from harvest.

Some species of smelts are among the few fish that sportsmen have been allowed to net, using hand-held dip nets, either along the coastline or in streams. Some sportsmen also ice fish for smelt. They are often fried and eaten whole.

In size, smelts usually grow to about 20 centimetres (8 inches) long, although some species can reach 70 cm (28 in). Smelts are a food source for many fish, including salmon, striped bass, and lake trout.

Like salmon, many species are anadromous, living most of their lives in the sea, but traveling into fresh water to breed. However, a few exceptions, such as the surf smelt, spend their entire lives at sea. 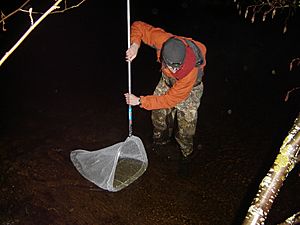 Smelt dipping in the Keweenaw Peninsula in Michigan

In the Canadian provinces and U.S. states around the Great Lakes, "smelt dipping" is a common group sport in the early spring and when stream waters reach around 4 °C (39 °F). Fish are spotted using a flashlight or headlamp and scooped out of the water using a dip net made of nylon or metal mesh. The smelt are cleaned by removing the head and the entrails. Fins, scales, and bones of all but the largest of smelts are cooked without removal.

On the Maine coast, smelts were also a sign of spring, with the run of these small fish up tiny tidal estuaries. Many of these streams were narrow enough for a person to straddle and get a good catch of smelts by dipping a bucket. 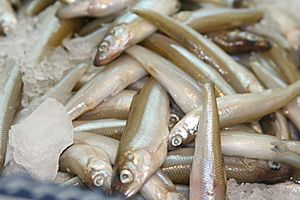 Close-up of smelt for sale at a California seafood market 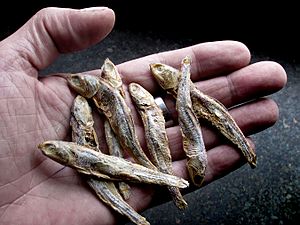 Smelts are an important winter catch in the saltwater mouths of rivers in New England and the Maritime Provinces of Canada. Fishermen would historically go to customary locations over the ice using horses and sleighs. Smelt taken out of the cold saltwater were preferred to those taken in warm water. The fish did not command a high price on the market, but provided a source of supplemental income due to their abundance. The smelts were "flash frozen" simply by leaving them on the ice and then sold to fish buyers who came down the rivers.

In the present day, smelts are fished both commercially using nets at sea, and for recreation by hand-netting them or spearing or angling them through holes in river ice. They are often the target fish of small 'fishing shack' villages that spring up along frozen rivers. Typical ways of preparing them to include pan-frying in flour and butter, or deep-frying in batter, and they are sometimes cooked directly out of the water over small stoves in the shacks.

Smelt is popular in Japan, as the species Sprinchus lanceolatus, and is generally served grilled, called shishamo, especially when full of eggs.

Smelt roe, specifically from capelin, called masago in Japanese, is yellow to orange in color and is often used in sushi.

Smelt is also served in dim sum restaurants, deep fried with the heads and tails attached, identified as duō chūn yú (多春鱼) or duō luǎn yú (多卵魚), which loosely translates as "fish with many eggs".

Smelt is one of the prime fish species eaten in Tamil Nadu as Nethili fry, Nethili karuvadu ( dried fish), coastal Karnataka, especially in Mangalore and Udupi regions, usually fried with heads and tailed removed or in curries. They are called 'Bolingei' (ಬೊಳಂಜೆ) in Kannada and Tulu and 'MotiyaLe' in Konkani. 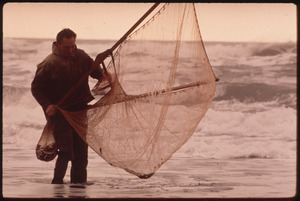 In the city of Inje, South Korea (Gangwon Province), an Ice Fishing Festival is held annually from January 30 to February 2 on Soyang Lake, coinciding with the smelt's yearly run into fresh water to spawn. They are locally known as bing-eo (빙어) and typically eaten alive or deep-fried.[1]

In Finland, the province of Paltamo has yearly Norssikarnevaali festivals in the middle of May.

For some Italians, especially from the region of Calabria, fried smelts are a traditional part of the Christmas Eve dinner consisting of multiple courses of fish.

In 1956, the Chamber of Commerce in Kelso, Washington, declared Kelso, located on the Cowlitz River, as the "Smelt Capital of the World". They erected billboards proclaiming this, and held festivals for the annual smelt runs until the runs dried up.

The village of Lewiston, New York, on the lower portion of the Niagara River, celebrates an annual two-day smelt festival the first weekend in May. During the festival, approximately 160 kilograms (350 pounds) of smelt are battered and fried at the Lewiston Waterfront. The smelt samples are free during the festival and donations are welcome, as they help support programs supported by the Niagara River Anglers. The festival has a motto, which is a play on words: "Lewiston never smelt so good."

The American Legion Post 82, in Port Washington, Wisconsin has been hosting its annual Smelt Fry since 1951. Located on the Western shore of Lake Michigan, 35 miles North of Milwaukee, Port Washington has a long history as a fishing community with commercial and sports ventures. The Legion's Smelt Fry happens every year in mid to late April. In mid-July, the quaint town hosts their Fish Day event, billed as "The world's largest, one-day, outdoor fish fry!"

At the time of the smelt's spring run in the Neva River at the head of the Gulf of Finland on the Baltic Sea in Saint Petersburg, a Smelt Festival [ru] (Prazdnik koryushki) is celebrated.

All content from Kiddle encyclopedia articles (including the article images and facts) can be freely used under Attribution-ShareAlike license, unless stated otherwise. Cite this article:
Smelt (fish) Facts for Kids. Kiddle Encyclopedia.