Kids Encyclopedia Facts
This page is about the city. For the adjacent town, see Port Washington (town), Wisconsin.

Port Washington is the county seat of Ozaukee County in the U.S. state of Wisconsin. Located on Lake Michigan's western shore east of Interstate 43, the community is a suburb in the Milwaukee metropolitan area 27 miles north of the City of Milwaukee. The city's artificial harbor at the mouth of Sauk Creek was dredged in the 1870s and was a commercial port until the early 2000s. The population was 11,250 at the 2010 census.

When French explorers arrived in the area in the 17th century, they found a Native American village at the mouth of Sauk Creek - the present location of historic downtown Port Washington. The United States Federal Government forcibly expelled the Native Americans in the 1830s, and the first settlers arrived in 1835, calling their settlement "Wisconsin City" before renaming it "Port Washington" in honor of President George Washington. In the late 1840s and early 1850s, the community was a candidate to be the Washington County seat. Disagreements between municipalities and election fraud prevented Washington County from having a permanent seat of government until the Wisconsin State Legislature intervened, creating Ozaukee County out of the eastern third of Washington County and making Port Washington the seat of the new county.

For much of its history, Port Washington has been tied to the Great Lakes. Early settlers used boats to transport goods including lumber, fish, and grains, although the community's early years were marred by shipwrecks, which led the U.S. Federal Government to construct Port Washington Harbor in 1871. Commercial fishing prospered in Port Washington until the mid-20th century, and beginning in the 1930s, the Port Washington Generating Station used the harbor to receive large shipments of coal to burn for electricity. The commercial harbor closed in 2004 when the power station switched to natural gas for fuel, but the community maintains an active marina for recreational boaters. In the 21st century, Port Washington celebrates its lacustrine heritage with museums, public fish fries, sport fishing derbies, and sailboat races.

The area that became Port Washington was originally inhabited by the Sauk tribe of Native Americans, and later explored by the French in the late 17th century. In 1835, General Wooster Harrison became the town's first permanent settler, in what he originally named "Wisconsin City." Harrison later renamed the town "Washington". Harrison's wife, Rhoda, was the first white settler to be buried in the town, when she died in 1837. Around 1843 the name was changed to "Sauk Washington". The town of Port Washington was formed in January 1846 and until 1847 included the surrounding areas and what is currently Fredonia, Saukville, and Belgium. The City of Port Washington was incorporated with its present name in 1882.

With a natural harbor at the mouth of Sauk Creek, the city became a port on Lake Michigan. The city exported cord wood, wheat and rye flour, bricks, and fish and hides, among other things.

In 1843, the first Christian religious services were held by the Methodist Episcopal Church in private homes. The first Catholic Church services were held in a similar manner in 1847. The Washington Democrat, the town's first newspaper, was started in 1847 by Flavius J. Mills. The population reached 2,500 in 1853 and continued to increase, with an influx of immigrants from Germany and Luxembourg between 1853 and 1865.

The United States Congress passed a military conscription law in late 1862, and Wisconsites were drafted to fight in the Civil War. Yet immigrants were not often keen to fight, and Germans and Luxembourgers in Port Washington protested the draft. In November 1862, they burned draft records and vandalized the homes of prominent Port Washington Republicans (the political party of President Lincoln).

In 1870, the city saw major improvements in transportation. Not only was the railroad approved to extend through Ozaukee County, the harbor was substantially improved. The dredging that occurred resulted in the first man-made harbor in North America.

J. M. Bostwick was instrumental in the opening of the Wisconsin Chair Company in September 1888, the success of which allowed the town to flourish. The Gilson Manufacturing Company started making garden tractors and tractor lawn mowers in 1894 and soon became the second-largest business, after the Wisconsin Chair Factory.

In 1896, Delos and Herbert Smith brought their commercial fishing business to Port Washington as that harbor afforded them the use of a steam powered fish tug. There, the Smith family would call Port Washington home to their family business. Smith Bros., as it was called, grew to a fleet of fishing tugs, fish wholesale, whitefish caviar, burbot oil, fish retail (markets), restaurants, and a hotel.

The Port Washington power plant operated by Wisconsin Electric Power Company, now known as We Energies, was established in the area. In 1943 the company stated that the Port Washington Plant was "the most efficient steam power plant in the world." The coal-fired plant received shipments of coal primarily by lake boat from its beginnings in 1935 until 2004 when the coal-fired boilers were taken out of service. The plant has since been converted to generate electricity from natural gas. The end of coal shipments also ended the use of Port Washington as a commercial port. The harbor is now used almost exclusively by recreational boaters. 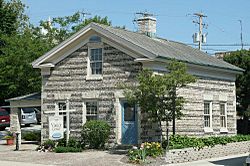 Port Washington has the largest collection of pre-Civil War buildings in Wisconsin, several of which are on the National Register of Historic Places. The Port Washington Visitor Center is itself in the historic Edward Dodge House, also known as the "Pebble House." The three-story brick courthouse was built in 1854 and originally served as jail, housing for the jailer, county offices and courtrooms.

The city is located at the mouth of Sauk Creek on Lake Michigan, and includes the 63-acre (250,000 m²) Lake Bluff Park, where Possibility Playground is located. Its average elevation above sea level is 612 feet (187 m). Downtown Port Washington is close to the level of Lake Michigan (approximately 581 feet above sea level) and adjacent to the marina. The remainder of the city resides somewhat higher, spread across seven hills.

Lion's Den Gorge Nature Preserve is a large bluffland and wetland county protected area on the shore of Lake Michigan, just south of the city.

There were 4,704 households, of which 29.2% had children under the age of 18 living with them, 51.0% were married couples living together, 8.3% had a female householder with no husband present, 3.5% had a male householder with no wife present, and 37.2% were non-families. 31.0% of all households were made up of individuals, and 11.9% had someone living alone who was 65 years of age or older. The average household size was 2.31 and the average family size was 2.91.

Interstate 43 passes around Port Washington to the city's west and north. WI-32 passes north to south through the city while WI-33 travels from the west before it terminates downtown.

The Ozaukee Interurban Trail, a cycling trail that follows the former interurban rail line, passes through Port Washington as it traverses Ozaukee County.

The TransPORT taxi service is available within the city and surrounding two-mile radius. 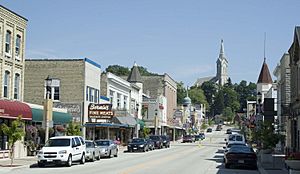 Port Washington's early economy was heavily based on harvesting and shipping raw materials from natural resources, including lumber, fish, fur, wheat and rye, and beginning in the 1870s, dairy farming played an increasingly important role in the Town of Port Washington's economy with creameries and cheese factories in rural hamlets like Knellsville. By the mid-20th century, dairy farming accounted for 80% of agriculture in the Port Washington area. 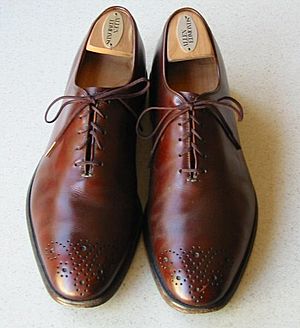 Allen Edmonds has its headquarters and shoe-assembly plant in Port Washington.

In the 1880s and 1890s, Port Washington became increasingly industrial, with the Wisconsin Chair Company being the largest employer. In the 20th century, other manufacturers in the community included Allen Edmonds, Bolens Corporation, Koering Co., Simplicity Manufacturing Company, and Trak International. While Allen Edmonds continues to manufacture high-end shoes in the city, many of the other manufacturers closed or were purchased by larger companies between the 1970s and 2000s. In 2001, MTD Products acquired the Bolens Corporation. In 2004, Briggs & Stratton purchased Simplicity Manufacturing and closed the Port Washington plant in October 2008. As of 2015, manufacturing accounted for approximately 25% of Port Washington's jobs, a significant decrease from the early 20th century when the Wisconsin Chair Company alone accounted for 50% of the city's jobs.

The district is governed by a nine-member elected school board, which meets on Mondays at 6 p.m. in the District Office Board Room, 100 W. Monroe Street, Port Washington. The district also has a full-time superintendent: Michael R. Weber.

Additionally, St. John XXIII Catholic Parish (of the Roman Catholic Archdiocese of Milwaukee) operates a parochial school in the city for students from kindergarten through eighth grade. 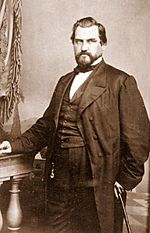 Leland Stanford (1824–1893) had a law practice in Port Washington in the early 1850s before moving to California, where he built a business empire and was involved in the construction of First Transcontinental Railroad. He later served as a United States Senator and Governor of California, and used his considerable fortune to create Stanford University.

All content from Kiddle encyclopedia articles (including the article images and facts) can be freely used under Attribution-ShareAlike license, unless stated otherwise. Cite this article:
Port Washington, Wisconsin Facts for Kids. Kiddle Encyclopedia.