Kids Encyclopedia Facts
This page is about the town. For the adjacent village, see Belgium, Wisconsin.

Beginning in the 1840s, immigrant farmers from Luxembourg settled in the towns of Northern Ozaukee County, including Belgium. Their centers of settlement in the Town of Belgium included the hamlets of Dacada, Holy Cross, and Lake Church, as well as the settlement that would eventually become the Village of Belgium, which incorporated from some of the town's land in 1922. The Town of Belgium is a primarily agricultural community with over 18,000 acres of farmland — the largest amount in any Ozaukee County community. 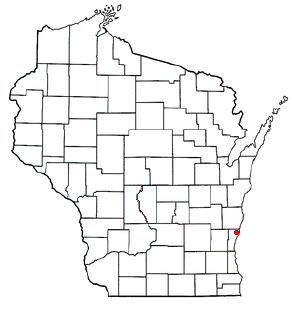 There were 547 households, out of which 33.1% had children under the age of 18 living with them, 66.7% were married couples living together, 6.0% had a female householder with no husband present, and 22.9% were non-families. 18.3% of all households were made up of individuals, and 6.4% had someone living alone who was 65 years of age or older. The average household size was 2.77 and the average family size was 3.19.

Interstate 43 runs north-south through the eastern part of the town with access via Exit 107.

Ozaukee County Transit Services' Shared Ride Taxi provides a public transit option for Belgium residents. The taxis operate seven days a week and make connections to Washington County Transit and Milwaukee County Routes 12, 49 and 42u. Unlike a typical taxi, however, the rider must contact the service ahead of time to schedule their pick-up date and time. The taxi service plans their routes based on the number of riders, pick-up/drop-off time and destination then plans the routes accordingly.

The Ozaukee Interurban Trail, which is for pedestrian and bicycle use, passes through Belgium and connects the town to the neighboring communities of Port Washington and Cedar Grove, and continues north to Oostburg and south to Milwaukee County.

The Union Pacific Railroad operates a freight rail line running parallel to the Ozaukee Interurban Trail, but Belgium currently does not have a passenger train station.

All content from Kiddle encyclopedia articles (including the article images and facts) can be freely used under Attribution-ShareAlike license, unless stated otherwise. Cite this article:
Belgium (town), Wisconsin Facts for Kids. Kiddle Encyclopedia.