Kids Encyclopedia Facts
This page is about the village. For the adjacent town, see Saukville (town), Wisconsin.

Saukville is a village in Ozaukee County, Wisconsin, United States. Located on the Milwaukee River with a district along Interstate 43, the community is a suburb in the Milwaukee metropolitan area. The population was 4,451 at the 2010 census.

Downtown Saukville was the site of a Native American village at the crossroads of two trails before white settlers arrived in the mid-1840s. In its early years, the community was a stagecoach stop on the road from Milwaukee to Green Bay and also grew as a mill and market town serving the dairy farmers of northwestern Ozaukee County. The village incorporated in 1915 and later in the 20th Century grew into a suburban community with a manufacturing-based economy. As of 2019, more than 40% of the village's jobs were in manufacturing, with the largest employers being a steel mill as well as several foundries and metal fabricators.

The village and the neighboring Town of Saukville are rich in biodiverse bogs and coniferous swamps, the largest of which is the 2,200-acre Cedarburg Bog State Natural Area. The area's bogs are a habitat for endangered species, many types of birds, and carnivorous plants. Among other landforms, the Cedarburg Bog contains a string bog — a geographic feature that seldom occurs as far south as Wisconsin — which contains many plant species rarely seen outside remote parts of Canada.

Saukville was established on April 4, 1848 along the Milwaukee River. Previously, it was part of the old Port Washington area. Settlers began living in the area as early as 1845 and 1846. Before the white settlers came to the Saukville, the area was inhabited by the Native Americans, including the Sauk tribe.

There were 1,766 households, of which 36.2% had children under the age of 18 living with them, 53.6% were married couples living together, 10.4% had a female householder with no husband present, 4.4% had a male householder with no wife present, and 31.6% were non-families. 26.2% of all households were made up of individuals, and 5.7% had someone living alone who was 65 years of age or older. The average household size was 2.52 and the average family size was 3.06. 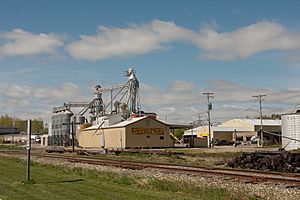 A grain elevator near the railroad in Saukville. 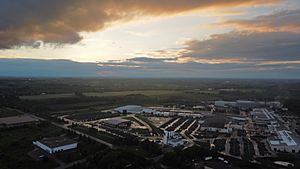 As of 2019, Charter Steel was the largest employer in Saukville.

Saukville's early economy was primarily agricultural, and the first major businesses were hydropowered mills on the Milwaukee River as well as other businesses that served the local farmers. In the late 19th century and into the 20th century, dairy farming was a major industry in the Saukville area. As the village grew in the 20th century, the local economy diversified. As of 2019, manufacturing accounted for over 40% of local jobs, with three of the village's largest employers being metal manufacturers. Many of the village's manufacturers are located in the Dekora Woods Business and Industrial Park in north-central Saukville, west of Interstate 43.

The district is governed by a nine-member elected school board, which meets on Mondays at 6 p.m. in the District Office Board Room, 100 W. Monroe Street, Port Washington. The district also has a full-time superintendent: Michael R. Weber.

The University of Wisconsin–Milwaukee Field Station is a 320-acre nature preserve and laboratory adjacent to the Cedarburg Bog State Natural Area, west of the village. The field station grounds and laboratories are not open to the general public, but are used by university students and faculty to conduct biological and ecological research. 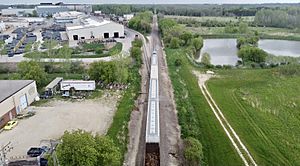 The Canadian National Railway picks up cars laden with steel products at the Charter Steel plant.

Interstate 43 passes through eastern Saukville with access via Exit 96. The junction of Interstate 43 and Wisconsin Highway 57 is located at the village's northeastern municipal boundary.

All content from Kiddle encyclopedia articles (including the article images and facts) can be freely used under Attribution-ShareAlike license, unless stated otherwise. Cite this article:
Saukville, Wisconsin Facts for Kids. Kiddle Encyclopedia.