Fagus grandifolia, the American beech or North American beech, is the species of beech tree native to the eastern United States and extreme southeast Canada.

The genus name Fagus is Latin for "beech", and the specific epithet grandifolia comes from grandis "large" and folium "leaf".

The American beech is native to eastern North America, from Nova Scotia west to southern Ontario in southeastern Canada, west to Wisconsin and south to eastern Texas and northern Florida in the United States.

Trees in the southern half of the range are sometimes distinguished as a variety, F. grandifolia var. caroliniana, but this is not considered distinct in the Flora of North America. The Mexican beech (Fagus grandifolia var. mexicana), native to the mountains of central Mexico, is closely related, and is sometimes treated as a subspecies of American beech, but some botanists often classified as a distinct species. The only Fagus species found in the Western Hemisphere (assuming F. mexicana is treated as a subspecies), F. grandifolia is believed to have spanned the width of the North American continent all the way to the Pacific coast before the last ice age.

It is a deciduous tree growing to 20–35 m (66–115 ft) tall, with smooth, silver-gray bark. The leaves are dark green, simple and sparsely-toothed with small teeth that terminate each vein, 6–12 cm (2 1⁄4–4 3⁄4 in) long (rarely 15 cm, 6 in), with a short petiole. The winter twigs are distinctive among North American trees, being long and slender (15–20 mm (5⁄8–3⁄4 in) by 2–3 mm (0.079–0.118 in)) with two rows of overlapping scales on the buds. Beech buds are distinctly thin and long, resembling cigars; this characteristic makes beech trees relatively easy to identify. The tree is monoecious, with flowers of both sexes on the same tree. The fruit is a small, sharply-angled nut, borne in pairs in a soft-spined, four-lobed husk. It has two means of reproduction: one is through the usual dispersal of seedlings, and the other is through root sprouts (new trees sprout from the roots in different locations).

The American beech is a shade-tolerant species, commonly found in forests in the final stage of succession. Few trees in its natural range other than sugar maple match it for shade tolerance. Ecological succession is essentially the process of forests changing their composition through time; it is a pattern of events often observed on disturbed sites. Although sometimes found in pure stands, it is more often associated with sugar maple (forming the beech–maple climax community), yellow birch, and eastern hemlock, typically on moist, well-drained slopes and rich bottomlands. Near its southern limit, it often shares canopy dominance with southern magnolia. Although it has a reputation for slow growth (sometimes only 13 feet in 20 years), rich soil and ample moisture will greatly speed the process up. American beech favors a well-watered, but also well-drained spot and is intolerant of urban pollution, salt, and soil compaction. It also casts heavy shade and is an extremely thirsty tree with high moisture requirements compared to oaks, so it has a dense, shallow root system. Although American beech's natural range extends across most of the eastern US and southeastern Canada, mature specimens are rare in lowland areas as early settlers quickly discovered that the presence of the tree indicated good farmland.

Beech bark disease has become a major killer of beech trees in the Northeastern United States. This disease occurs when the beech scale insect, Cryptococcus fagisuga, attacks the bark, creating a wound that is then infected by one of two different species of fungi in the genus Nectria. This causes a canker to develop and the tree is eventually killed.

Beech blight aphids colonize branches of the tree, but without serious harm to otherwise healthy trees. Below these colonies, deposits of sooty mold develop caused by the fungus Scorias spongiosa growing saprophytically on the honeydew the insects exude. This is also harmless to the trees.

Beech leaf disease, first discovered in Ohio in 2012, is thought to be caused by nematodes. It has spread to several other states as well as Canada and has the potential to kill millions of trees throughout North America and may threaten the beeches of Europe as well.

Despite their high moisture needs, beeches succumb to flooding easily and their thin bark invites damage from animals, fire, and human activities. Late spring frosts also cause considerable damage to the tree. The trunks of mature beeches often rot and develop cavities that are used by wildlife for habitation. 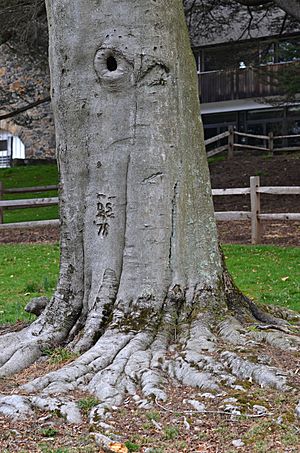 A carving in the bark of the tree

American beech is an important tree in forestry. The wood is hard and difficult to cut or split, although at 43 pounds per cubic foot (0.69 g/cm3) it is not exceptionally heavy, and it also rots relatively easily. It is used for a wide variety of purposes, most notably bentwood furniture as beech wood easily bends when steamed. It also makes high quality, long-burning firewood.

Like European beech bark, the American beech bark is smooth and uniform, making it an attraction for people to carve names, dates, decorative symbols such as love hearts or gang identifiers, and other material into its surface. One such beech tree in Louisville, Kentucky, in what is now the southern part of Iroquois Park, bore the legend "D. Boone killed a bar. 1775" and the year in the late 18th century. This carving was first reported in the 19th century, but is believed to have not been produced by Boone since he was an educated man who would not have written something so semi-literate. The beech finally fell over in 1916 during a storm; its age was estimated at around 325 years. Its trunk is now on display at The Filson Historical Society.

It is sometimes planted as an ornamental tree, but even within its native area, it is planted much less often than the European beech. Although American beech can handle hotter climates, its European cousin is faster-growing and more pollution-tolerant, in addition to being easier to propagate.

American beech does not produce significant quantities of nuts until the tree is about 40 years old. Large crops are produced by 60 years. The oldest documented tree is 246 years old. The fruit is a triangle-shaped shell containing 2–3 nuts inside, but many of them do not fill in, especially on solitary trees. Raw beech nuts are edible to wildlife and humans, and can also be cooked, but are too small to be commercially valuable.

The mast (crop of nuts) from American beech provides food for numerous species of animals. Among vertebrates alone, these include ruffed grouse, wild turkeys, raccoons, red/gray foxes, white-tailed deer, rabbits, squirrels, opossums, pheasants, black bears, porcupines, and humans. For lepidopteran caterpillars feeding on American beech, see list of Lepidoptera that feed on beeches. Deer occasionally browse on beech foliage, but it is not a preferred food. Beech nuts were one of the primary foods of the now-extinct passenger pigeon; the clearing of beech and oak forests is pointed to as one of the major factors that may have contributed to the bird's extinction.

All content from Kiddle encyclopedia articles (including the article images and facts) can be freely used under Attribution-ShareAlike license, unless stated otherwise. Cite this article:
Fagus grandifolia Facts for Kids. Kiddle Encyclopedia.