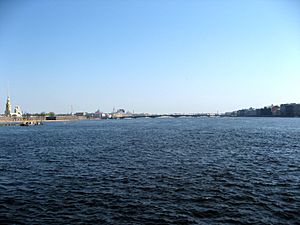 View from the Trinity Bridge

The Neva River is a river in northwestern Russia. It is 74 kilometres (46 mi) long. It flows into the Gulf of Finland. The city of Saint Petersburg is on its delta.

History of the delta

In the Paleozoic, 300–400 million years ago, the entire territory of the modern delta of the Neva River was covered by a sea. Modern relief was formed as a result of glacier activity. Its retreat formed the Littorina Sea, the water level of which was some 7 to 9 metres (23 to 30 ft) higher than the present level of the Baltic Sea. Then, the Tosna River was flowing in the modern bed of the Neva, from east to west into the Litorinal Sea. In the north of the Karelian Isthmus, the Littorina Sea united by a wide strait with Lake Ladoga. The Mga River then flowed to the east, into Lake Ladoga, near the modern source of the Neva River; the Mga then was separated from the basin of the Tosna.

Near the modern Lake Ladoga, land rose faster, and a closed reservoir was formed. Its water level began to rise, eventually flooded the valley of Mga and broke into the valley of the river Tosna. The Ivanovo rapids of the modern Neva were created in the breakthrough area. So about 2000 BC the Neva was created with its tributaries Tosna and Mga. According to some newer data, it happened at 1410–1250 BC making the Neva a rather young river. The valley of Neva is formed by glacial and post-glacial sediments and it did not change much over the past 2500 years. The delta of Neva was formed at that time, which is actually pseudodelta, as it was formed not by accumulation of river material but by plunging into the past sediments. 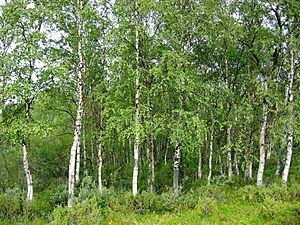 There is almost no aquatic vegetation in Neva. The river banks mostly consist of sand, podsol, gleysols, peat and boggy peat soils. Several centuries ago, the whole territory of the Neva lowland was covered by pine and spruce mossy forests. They were gradually reduced by the fires and cutting for technical needs. Extensive damage was caused during World War II: in St. Petersburg, the forests were reduced completely, and in the upper reaches down to 40 to 50 percent. Forest were replanted after the war with spruce, pine, cedar, Siberian larch, oak, Norway maple, elm, America, ash, apple tree, mountain ash and other species. The shrubs include barberry, lilac, jasmine, hazel, honeysuckle, hawthorn, rose hip, viburnum, juniper, elder, shadbush and many others.

Nowadays, the upper regions of the river are dominated by birch and pine-birch grass-shrub forests and in the middle regions there are swampy pine forests. In St. Petersburg, along the Neva, there are many gardens and parks, including the Summer Garden, Field of Mars, Rumyantsev, Smolny, Alexander Gardens, Garden of the Alexander Nevsky Lavra and many others.

Because of the rapid flow, cold water and lack of quiet pools and aquatic vegetation the diversity of fish species in Neva is small. Permanent residents include such undemanding to environment species as perch, ruffe and roaches. Many fish species are transitory, of which commercial value have smelt, vendace and partly salmon.

Construction of the Novo-Admiralteisky Bridge, a movable drawbridge across the river, has been approved, but will not commence before 2011. 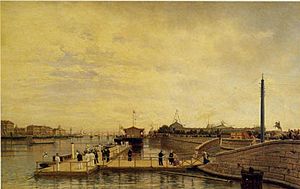 Neva River in a nineteenth-century painting 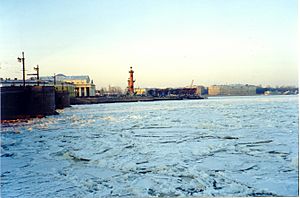 Neva in a frozen state

Whereas most tourist attractions of Neva are located within St. Petersburg, there are several historical places upstream, in the Leningrad Oblast. They include the fortress Oreshek, which was built in 1323 on the Orekhovy Island at the source of Neva River, south-west of the Petrokrepost Bay, near the city of Shlisselburg. The waterfront of Schlisselburg has a monument of Peter I. In the city, there are Blagoveshchensky Cathedral (1764–95) and a still functioning Orthodox church of St. Nicholas, built in 1739. On the river bank stands the Church of the Intercession. Raised in 2007, it is a wooden replica of a historical church which stood on the southern shore of Lake Onega. That church was constructed in 1708 and it burned down in 1963. It is believed to be the forerunner of the famous Kizhi Pogost.

Old Ladoga Canal, built in the first half of the 18th century, is a water transport route along the shore of Lake Ladoga which is connecting the River Volkhov and Neva. Some of its historical structures are preserved, such as a four-chamber granite sluice (1836) and a bridge (1832).

All content from Kiddle encyclopedia articles (including the article images and facts) can be freely used under Attribution-ShareAlike license, unless stated otherwise. Cite this article:
Neva River Facts for Kids. Kiddle Encyclopedia.