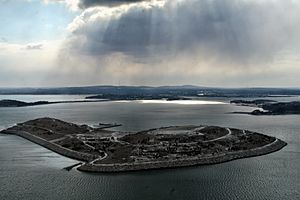 Spectacle Island is a 114-acre island in Boston Harbor, 4 miles (6.4 km) offshore of downtown Boston, Massachusetts. It is part of the city of Boston. The island has a varied history, and today is a public park with a marina, visitor center, cafe, lifeguarded swimming beach, and five miles of walking trails, forming part of the Boston Harbor Islands National Recreation Area. It is served all year by ferries from Boston, and on weekends and summer weekdays by a shuttle boat to and from nearby islands.

The island was initially composed of two small drumlins connected by a spit, with an approximate size of 49 acres (200,000 m2). The name is believed to derive from its then-resemblance to a pair of spectacles. However, dumping of trash and dirt, together with subsequent landscaping, have resulted in a significantly larger island with a permanent size of 85 acres (340,000 m2), plus an intertidal zone of a further 28 acres (110,000 m2).

The island is now composed of two artificial earth mounds, terraced with retaining walls, roads and newly planted vegetation. With a height above sea level of 157 feet (48 m), Spectacle Island is now one of the highest points on Boston Harbor. The island's inner harbor acreage is 114, with 85.5 upland acres and 28.4 intertidal acres. 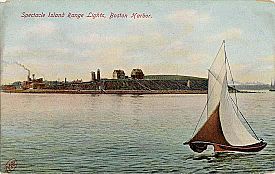 The island in 1907 showing the Spectacle Island Range Lights

Starting in the early 19th century, the island was used exclusively for its relative remoteness from Boston. Two hotels were built in 1847, only to be closed by police ten years later when it was discovered they were used for gambling and other illicit activities. 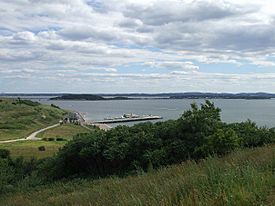 The marina on Spectacle Island in summer as viewed from one of the foot-trails from the North Summit. Thompson Island can be seen in the background.

A horse rendering plant was built on Spectacle Island in 1857, followed by a city trash incinerator that remained active until 1935. When the incinerator closed, trash was simply dumped on the island for the next thirty years. A bulldozer was supposedly swallowed up by the trash sometime during the 1950s. The island remained a smelly, leaking dump until the 1990s. 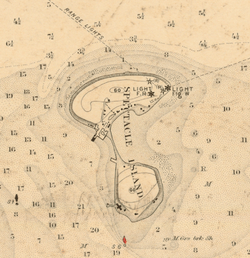 Two sets of range lights were erected on the island by the United States Lighthouse Service. The Spectacle Island Range Lights were established in 1897 to mark the last leg of the channel into Boston itself, past Governor's Island; they were not long-lived and were discontinued in 1913. The Broad Sound Channel Inner Range Lights were first lit in 1903 and discontinued around 1950; these indicated the middle leg of the trip. No trace of any of these lights remains.

When the Central Artery/Third Harbor Tunnel Project, or the Big Dig, began work in Boston in 1992, some of the project's excavated dirt and clay was used to resurface the island. The island was covered and built up by dirt, capped with two feet of clay, and covered with two to five feet of topsoil. Thousands of trees were planted, and paths, buildings, and a dock were built.

Spectacle Island opened to the public in June 2006 for use as a recreational area with hiking trails, a beach, a visitors' center with cafe, and a marina with 38 boat slips for visitors.

The marina on Spectacle Island in summer as viewed from one of the foot-trails from the North Summit. Thompson Island can be seen in the background.

Spectacle Island is accessible to the public either through a ferry from Long Wharf or to private watercraft at the island's marina. Ferries run from and to Boston as well as from and to Georges Island. The marina was closed for almost two years in the late 2010s due to repairs required as the result of a storm in the winter of 2015. As of July 2017, the marina is open and public moorings are available.

All content from Kiddle encyclopedia articles (including the article images and facts) can be freely used under Attribution-ShareAlike license, unless stated otherwise. Cite this article:
Spectacle Island (Massachusetts) Facts for Kids. Kiddle Encyclopedia.