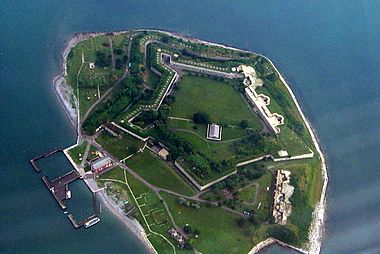 Georges Island from the air. 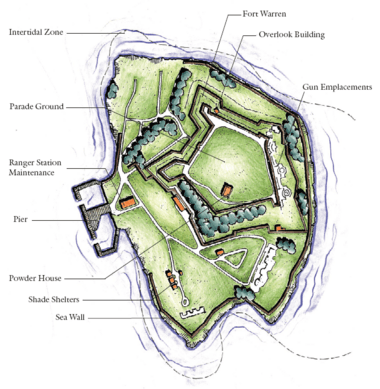 Georges Island from the water. 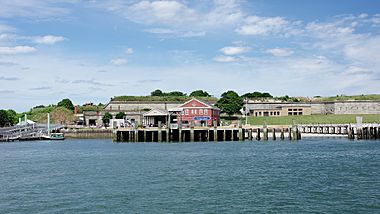 View from the water of the dock, visitor center, and fort entrance.

Georges Island is one of the islands in the Boston Harbor, situated just over 7 miles (11 km) from downtown Boston. The island has a permanent size of 39 acres (160,000 m2), plus an intertidal zone of a further 14 acres (57,000 m2), and rises to a height of 50 feet (15 m) above sea level. Historic Fort Warren is on the island. Because of this, and since a ferry operates from Boston to the island, it is a popular destination and one of the easiest islands to access in the Boston Harbor Islands National Recreation Area.

At the time of Euro-American colonization, Georges Island was composed of two drumlins, rising out of the bay like other nearby islands. The island was used for agriculture for 200 years until 1825 when the U.S. Government acquired it for coastal defense.

Over the next 20 years the island was dramatically altered, and one of the country's finest forts was built. Dedicated in 1847, Fort Warren's defensive design was virtually obsolete upon completion. However, the fort served as a training ground, patrol point, and Civil War prison that gained a favorable reputation for the humane treatment of its Confederate prisoners. After 100 years of military use, the fort was decommissioned in 1947 and acquired by the Metropolitan District Commission for historic preservation and recreation in 1958.

To this day, in the fort's dark corridors, the legend lives on of "The Lady in Black," the ghost of a Confederate prisoner's wife who is said to have been sentenced to death for aiding in an escape after disguising herself as a male soldier, and hanged in a black robe which was the best the soldiers could do to accommodate her last request of being executed in female clothing. The myth was a creation of author Edward Rowe Snow to bring attention to Fort Warren need for preservation and protection.

The island has fields for recreational use, a small food vendor, and two mooring balls available to the public on a first-come, first-served basis. It is served throughout the summer and early fall by ferries to and from Boston and by a shuttle boat to and from the surrounding islands during the summer season.

Today the Massachusetts Department of Conservation and Recreation owns and staffs the island. Rangers patrol and give interpretive tours. The island is open to the public May through October. Georges Island is a transportation hub, as inter-island ferries run from Georges to other islands in the park. State laws prohibit alcohol, fireworks, and firearms on the island. Also, the island has a strict carry on–carry off policy for trash.

All content from Kiddle encyclopedia articles (including the article images and facts) can be freely used under Attribution-ShareAlike license, unless stated otherwise. Cite this article:
Georges Island (Massachusetts) Facts for Kids. Kiddle Encyclopedia.