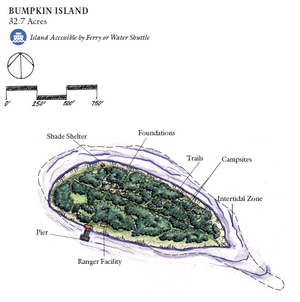 Map of Bumpkin Island, provided by the National Park Service 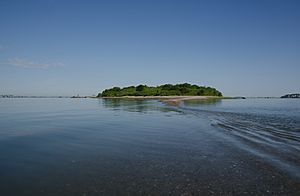 The island, seen from the sand spit, which connects it to Hull

Bumpkin Island, also known as Round Island, Bomkin Island, Bumkin Island, or Ward's Island, is an island in the Hingham Bay area of the Boston Harbor. In 1902, Albert Burrage, a Boston philanthropist, had a summer hospital opened on the island for children with physical disabilities. During World War I the island was used by the U.S. Navy. Starting around 1940, the island was used as a facility for polio patients. However, the hospital closed during World War II and burned down in 1945. Since 1996, it is part of the Boston Harbor Islands National Recreation Area. The island has an area of 30 acres (120,000 m2), plus an intertidal zone of a further 31 acres (130,000 m2). It is composed of a central drumlin with an elevation of 70 feet (21 m) above sea level, surrounded by a rock-strewn shoreline. A sand spit, exposed at low tide, connects the eastern end of the island to Sunset Point in Hull.

On weekends and summer weekdays, Bumpkin Island is accessible by a shuttle boat to and from Georges Island, which connects from there with ferries to Boston and Quincy.

All content from Kiddle encyclopedia articles (including the article images and facts) can be freely used under Attribution-ShareAlike license, unless stated otherwise. Cite this article:
Bumpkin Island Facts for Kids. Kiddle Encyclopedia.