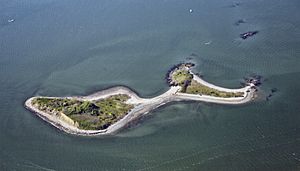 View from the water 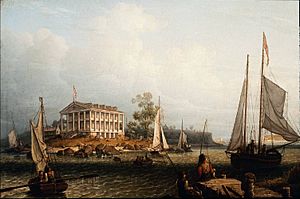 Quarantine Hospital on Rainsford Island, built in 1832 by Josiah Rogers 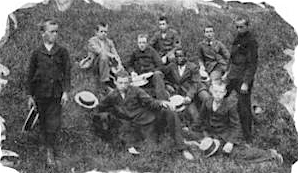 Boys at the Rainsford Island reformatory, 1897

Rainsford Island, formerly known Hospital Island, Pest House Island, and Quarantine Island, is a 11-acre (45,000 m2) island in the Boston Harbor, situated between Long Island and Peddocks Island. The island is composed of two drumlins, reaching an elevation of 49 feet (15 m) above sea level. The shoreline is predominantly rocky with a sandy cove in the south side, and a variety of wildflowers abound. Access is by private boat only. Since 1996 it has been part of the Boston Harbor Islands National Recreation Area.

All content from Kiddle encyclopedia articles (including the article images and facts) can be freely used under Attribution-ShareAlike license, unless stated otherwise. Cite this article:
Rainsford Island Facts for Kids. Kiddle Encyclopedia.