Bay Village is the smallest officially-recognized neighborhood of Boston, Massachusetts. As of 2010[update], its population was approximately 1,312 residents living in 837 housing units, most of which are small brick rowhouses.

The Massachusetts Turnpike is the southern boundary of the neighborhood, which coincides with the right-of-way of the former Boston and Worcester Railroad, laid down in the 1830s. Marginal Road and Cortes Street are the surface roads that parallel "the Pike". Across the Pike to the southwest lies the South End neighborhood; to the southeast of the Pike and Tremont Street is the southern edge of Chinatown. To the west of Berkeley Street and north of Columbus Avenue (west of Arlington Street) is the Back Bay neighborhood. To the north of Stuart Street is Park Square, and to the east of Charles Street is the Washington Street Theatre District.

The narrow one-way network and irregular grid arrangement of the streets make the interior urban spaces of Bay Village relatively quiet and pedestrian-friendly, due to sparse automobile traffic. Most of the sidewalks are paved with brick, and are lit by gas streetlamps at night. One small street is still paved with original cobblestones, while the remainder have long ago been repaved with asphalt.

There are a few "vest-pocket parks" located within or nearby Bay Village, including Eliot Norton Park, which although technically located in the Theatre District, is just across Charles Street from the eastern boundary of the neighborhood. The Boston Public Garden and Boston Common are located just two blocks away from the northern edge of Bay Village.

Traditionally middle to lower-middle class, the neighborhood has become relatively more expensive and upscale, beginning around the 1990s. The Bay Village Neighborhood Association (BVNA) is very active in controlling urban nuisances, such as traffic, litter, graffiti, and pet wastes (an approved dog walking area is located next to Eliot Norton Park). The BVNA is also known for organizing Spring and Fall Cleanup days, a book club, and the Bay Village Annual Neighborhood Block Party (which features restaurant tables and service literally in the middle of the narrow streets, when permitted by the weather). 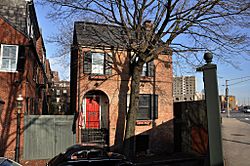 The House at 1 Bay Street, an 1830 house listed on the National Register of Historic Places (NRHP)

The western part of the neighborhood was originally part of the body of water known as the Back Bay, west of the Boston Neck isthmus. This area was once known as South Bay, as the original waterline was in the area of Arlington Street (formerly Ferdinand Street). In the 1820s, the neighborhood was landfilled by developer Ephraim Marsh, in partnership with Francis Cabot Lowell, before the more extensive landfills of the adjacent Back Bay and South End neighborhoods. Through its history, the neighborhood has been known at different times as the Church Street District, South Cove, and Kerry Village.

Architecturally, many Bay Village homes look like smaller versions of Beacon Hill townhouses. This is largely because many of the craftspeople who built the Beacon Hill residences settled in this area and built the local residences for their own use. Fayette Street, named for the American Revolutionary War soldier Marquis de Lafayette, has numerous houses dating from the Federal Period. Grander five-story townhouses in the Greek Revival style may be found on Melrose Street. After the area west of Ferdinand Street was filled in, developers built luxury residential "hotels" in the Victorian style on Cortes and Isabella Streets.

During the mid-to-late 19th century, most streets in Bay Village were raised 12–18 feet (4–6 m) to prevent flooding as the adjacent South End and Back Bay neighborhoods were created by continued landfill. Newer structures were built to this raised elevation, but many older buildings were modified with new entrances into what had previously been the second floor. Visitors can see evidence of this today by noting the location of the basement windows in some of the buildings on Fayette Street, as well as arches opening to horsewalks that ran under the houses to stables in the rear. In addition, some private gardens were never raised, and remain near their original elevations.

The American writer Edgar Allan Poe was born at the edge of Bay Village; his parents were both actors in the Theatre District nearby. A commemorative plaque on Boylston Street is a couple of blocks away from the actual location of Poe's birth. The house which was his birthplace at 62 Carver Street no longer exists; also, the street has since been renamed "Charles Street South". A "square" at the intersection of Broadway, Fayette, and Carver Streets had once been named in his honor, but it disappeared when the streets were rearranged. In 2009, the intersection of Charles and Boylston Streets (two blocks north of his birthplace) was newly designated "Edgar Allan Poe Square". A residential condominium a few streets away within Bay Village is also named in his honor, but otherwise has no known connection to the author.

In 2014, a permanent memorial bronze sculpture by Stefanie Rocknak was installed at Edgar Allan Poe Square. Poe Returning to Boston depicts a life-sized Poe striding against the wind, accompanied by a flying raven; his suitcase lid has fallen open, leaving a "paper trail" of literary works embedded in the sidewalk behind him. 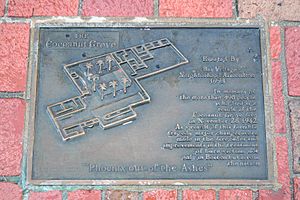 Bay Village was the site of the November 1942 fire at the Cocoanut Grove nightclub, in which 492 people lost their lives. Its terrible aftermath led to the creation and enforcement of stringent fire codes across the US, in the hope of preventing other such tragedies. Marking the 50th anniversary of the incident, the Bay Village Neighborhood Association placed a memorial plaque in the brick sidewalk near the club’s former site on Piedmont Street, now partially occupied by the Revere Hotel (formerly the Radisson Hotel). The plaque states:

The Cocoanut Grove. Erected by the Bay Village Neighborhood Association, 1993. In memory of the more than 490 people who died in the Cocoanut Grove fire on November 28, 1942. As a result of that terrible tragedy, major changes were made in the fire codes, and improvements in the treatment of burn victims, not only in Boston but across the nation. "Phoenix out of the Ashes"

A smaller inscription in the lower left corner says, "This plaque crafted by Anthony P. Marra, youngest survivor of the Cocoanut Grove fire".

On November 30, 2013, a short street running through the former site of the Cocoanut Grove Club, and previously named "Shawmut Extension", was renamed "Cocoanut Grove Lane". The on-site renaming ceremony was attended by several survivors of the fire and around 250 guests and spectators. Speakers included Marty Walsh, who had recently been elected mayor of Boston, but not yet sworn into office.

The plaque was removed in 2014 for the construction of new condominium residences on the site, but was reinstalled in June 2016 as previously agreed to by the developer. However a few weeks later, the plaque was relocated to the corner of Cocoanut Grove Lane nearby, at the request of some condominium owners. The relocation was objected to by the surviving daughter of Anthony P. Marra (who had designed the plaque), with support from other interested parties. According to a Boston Globe article, the condo owners stated "We now occupy these homes with our families as part of the Bay Village neighborhood and would like to enjoy our homes in peace, without tragic memories, hanging wreaths at our doors and tourists peeking into our houses”. One of the condominium developers has claimed that the new placement of the plaque is closer to the original location of the infamous revolving door at the entrance to the nightclub, which had become jammed in the panic and had trapped many victims.

Several MBTA rapid transit stations are located just beyond the boundaries of Bay Village, which is also served by several local bus routes. Commuter rail and Amtrak long-haul trains stop at Back Bay Station and South Station, within walking distance to the west and east of Bay Village, respectively. Inter-city bus services depart from the regional South Station Bus Terminal.

Nearby MBTA stations include:

On-street parking is very scarce within Bay Village, and is mostly reserved for holders of Residential Parking stickers. Commercial parking is available in numerous surface lots and parking garages located near or in the neighborhood. Entrance ramps to the Massachusetts Turnpike (I-90) and the Central Artery (I-93) are a minute's drive away.

All content from Kiddle encyclopedia articles (including the article images and facts) can be freely used under Attribution-ShareAlike license, unless stated otherwise. Cite this article:
Bay Village, Boston Facts for Kids. Kiddle Encyclopedia.