The West End is a neighborhood of Boston, Massachusetts, bounded generally by Cambridge Street to the south, the Charles River to the west and northwest, North Washington Street on the north and northeast, and New Sudbury Street on the east. Beacon Hill is to the south, North Point is across the Charles River to the north, Kendall Square is across the Charles River to the west, and the North End is to the east. A late 1950s urban renewal project razed a large African American Italian and Jewish enclave and displaced over 20,000 people in order to redevelop much of the West End and part of the neighboring Downtown neighborhood. Today, much of the original West End is non-residential, including part of Government Center (formerly Scollay Square) as well as much of Massachusetts General Hospital and several high rise office buildings. 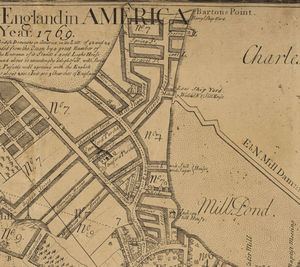 The West End occupies the northwest portion of the Shawmut Peninsula. Much of the land on which the neighborhood lies is the product of land reclamation. Beginning in 1807, parts of Beacon Hill were used to fill in a small bay and mill pond that separated Beacon Hill and the West End from the North End. Today the neighborhood consists primarily of superblocks containing high rise residential towers. The West End borders the Charles River between the Longfellow Bridge and the Charles River Dam Bridge. The Charlesbank Playground runs along the bank of the river, but is separated from the rest of the neighborhood by Storrow Drive, a large crosstown expressway. 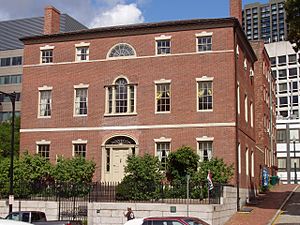 In the late 18th and early 19th centuries, Boston's waterfront and North End were becoming overcrowded, and many of the city's well off residents took the opportunity to develop the area now known as the West End. At that time, the area was separated from the older neighborhoods by a small bay. The architect Charles Bulfinch was responsible for much of Boston's architectural character at the time, and played a large part in this new development of the West End.

Bulfinch spent much of his early career in the 1790s designing mansions, many of them in the West End and other Boston neighborhoods. One of the most famous examples of these was the first Harrison Gray Otis House. This historic building was the first of three that Bulfinch designed for the affluent lawyer Harrison Gray Otis, and is one of the few buildings that survived Urban Renewal in the West End. Other West End landmarks designed by Bulfinch were the Massachusetts General Hospital's domed granite building, built 1816–1825 (today known as the Bulfinch Pavilion), and the West End Market on the corner of Grove and Cambridge Streets. Constructed in 1810, this historic market did not survive the area's redevelopment in the 1950s. Bulfinch's architecture of newer large brick buildings with gardens attracted many of Boston's wealthier citizens. By 1810, the West End was inhabited by wealthy business men, merchants, and lawyers. Many would soon move to the nearby Beacon Hill, turning the West End into an African American community and stopping point for new immigrants.

Another early West End building is the Charles Street Jail (1851), designed by Gridley James Fox Bryant, which was renovated into the Liberty Hotel. 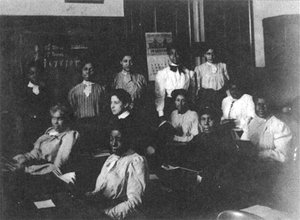 From the second half of the 19th century to the mid-20th century, Boston's West End became a home to many different immigrant groups. The wealthy and middle class business men were almost entirely gone, but many African Americans remained in the neighborhood, making it one of Boston's most diverse. Among the many immigrant groups contributing to this melting pot were Armenians, Greeks, Irish, Lebanese, Italians, Jews, Lithuanians, Poles, Russians, Syrians, Ukrainians and many other Eastern and Southern Europeans. It was during this period that the neighborhood's population reached its peak at approximately 23,000 residents

As a result of this immigration, the religious make-up of the neighborhood changed dramatically. Protestant churches moved away or shut down, to be replaced by Catholic churches and synagogues. For example, the old West Church, built in 1806 closed in 1892 due to lack of congregation. It reopened two years later as a library to better serve the new community.

One of the first new immigrant groups to settle the West End was the Irish. After briefly passing through the North End, many Irish families moved on to the West and South ends. The West End soon developed a thriving Irish community.

Later on, this community became associated with Martin Lomasney. Lomasney, also known as "the Mahatma", was the ward boss of Boston's Ward 8 located in the West End. He was well known for taking care of the community that had developed there, especially the Irish families. 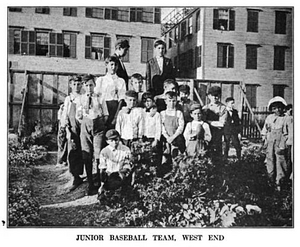 Early in Lomasney's career, he established the Hendricks Club in the heart of the neighborhood. The Hendricks began as a social club and gathering place, but later turned into the center of Lomasney's political machine. It was from here that he began to provide social services, charity, and shelter for poor immigrants. In return, he was able to drum up votes and support from much of the neighborhood.

By the late 19th and early 20th centuries, the Irish immigration had slowed and Eastern European Jews began to immigrate into the West End in large numbers. Many came to escape persecution in Lithuania, Russia, and Poland. They formed a community in the West End and became a significant part of the population by 1910. They made their home in the neighborhood, constructing health centers, libraries, labor unions, loan societies, orphanages, and synagogues. Actor Leonard Nimoy was raised in this community. The new Boston Synagogue, the 1919 Vilna Shul, and the African Meeting House which was the home of Anshi Lubuvicher from 1900 to 1972 are the only surviving West End synagogues. The Boston Synagogue is a newly merged congregation; the Vilna Shul, 16 Philips Street which was outside the urban renewal demolition area, is now a synagogue museum (vilnashul.org); and the African American Meeting House is now a church museum. Over the Vilna Shul's ark is the double hand symbol for the Kohanim, the ancient Israelite priests, which was the source for the Star Trek Vulcan salute. The Vilna Shul also has pews salvaged from the former Twelfth Baptist Church on which once sat former African American slaves and volunteers in the 54th Massachusetts Infantry Regiment popularized by the movie Glory. The Vilna was the last of the approximately seven West End synagogues to stay open, closing in 1985. 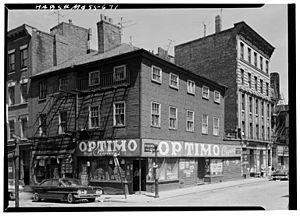 By the 1950s, Boston's West End had turned into a working poor residential area with scattered businesses with small meandering roads much like the North End. According to most residents, the West End was a good place to live at this time. The once overcrowded neighborhood was in the process of "deslumming" and the population had dropped to around 7,500 residents. By the end of the 1950s, over half of the neighborhood would be completely leveled to be replaced with residential high rises as part of a large scale urban renewal project.

The large-scale renewal of the West End was first proposed in the 1930s by Nathan Strauss Jr., among others, shortly after the National Housing Act of 1934 was passed. The neighborhood was considered a slum by wealthy Bostonians who did not live there. The working class residents of the West End felt strong ties to the community and so the plan would not become politically feasible until the 1950s.

By the end of the 1940s, Mayor Curley was running the city with an iron fist. Mayor Curley's administration's "policies all but ignored the White Anglo-Saxon Protestant (WASP) and Yankee business community." One of his tactics was to blame the woes of the poor on the wealthy. This is said to be one of the factors that caused an exodus from Boston and contributed to the blight that ensued.

‘’Curley made many enemies in his long career. He enjoyed verbally attacking the Boston Brahmins, and he encouraged his Irish constituents to blame their woes on the Yankees. Many of the people who had long dominated the city came to feel unwelcome in Boston. The exodus of Protestants to the suburbs that took place during the Curley era left a lasting legacy.’’

Even with the corruption charges that surrounded him Curley was seen as a people's mayor.

When the John B. Hynes administration came into power in 1949 city officials recognized that the federal government's Housing Act of 1949 presented the opportunity to remake parts of Boston. The Boston Housing Authority (BHA) held responsibility for developing Boston's urban renewal plans and was designated the city's local public authority for federal funds. 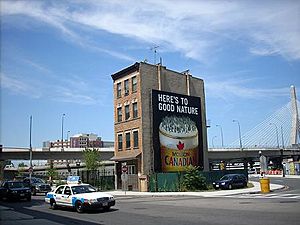 One of the few buildings (known as "The Last Tenement House") to survive the urban renewal of Boston's West End, 42 Lomasney Way, stands in one of the Super Blocks that was created by that project

As part of a plan to create a "New Boston", the Boston Housing Authority (BHA) and its 1957 successor, the Boston Redevelopment Authority, redeveloped neighborhoods throughout the 1950s and 1960s. The New York Streets section of the South End was redeveloped before the West End, and in the 1960s Scollay Square was leveled to create the Brutalist Government Center afterwards. The motivation behind these projects was to replace neighborhoods that had been classified as slums with neighborhoods that would bring in increased tax revenues. It is estimated that before the renewal project, the tax revenue from the West End was approximately $546,000 a year.

The redevelopment of the West End was officially announced on April 11, 1953. Mayor Hynes and the BHA stated that the project would be beneficial to the neighborhood. The West End's narrow streets were a fire hazard and many of the buildings were not up to code, with approximately 80% of them substandard or marginal. Tenants were assured that affordable housing would be found for them, and many were led to believe that they would be able to move back into the West End after the project was complete.

The plan involved completely leveling a 46-acre (190,000 m2) portion of the West End, displacing 2,700 families to make way for 5 residential high rise complexes that would contain only 477 apartments. The new development was aimed towards upper middle class residents: most of those displaced would not be able to afford to return.

In October 1957, the BRA held a hearing on the new project. At least 200 West End residents attended and the consensus was overwhelmingly opposed to the plan. The Save the West End committee was formed with the support of Joseph Lee to organize protests against the new development. Most residents believed that the project would not be realized, and so did not act until it was too late.

Residents received their eviction letters on April 25, 1958. The BRA used the Housing Act of 1949 to raze the West End to the ground. Working-class families were displaced, and superblocks replaced the original street layout. The result was a neighborhood consisting of residential high rises, shopping centers and parking lots.

One of the survivors of the West End's redevelopment phase is 42 Lomasney Way. Originally constructed in the 1870s, the building survived multiple redevelopment attempts, as well as two fires. Called "The Last Tenement" due to it being the only tenement structure still located in the West End, it also has been home to an associate of the Angiulo Brothers crime family.

View of the West End, looking down from top of Beacon Hill, 19th century

All content from Kiddle encyclopedia articles (including the article images and facts) can be freely used under Attribution-ShareAlike license, unless stated otherwise. Cite this article:
West End, Boston Facts for Kids. Kiddle Encyclopedia.