Larz Anderson Auto Museum is located in the Anderson Carriage House on the grounds of Larz Anderson Park in Brookline, Massachusetts and is the oldest collection of motorcars in the United States.

The museum is a non-profit educational institution with community events, lectures, children's programs, walking tours of the park, and an ever-changing series of exhibits on motor vehicles and the automobile's impact on society and culture. 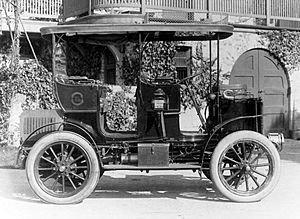 Gardner-Serpollet of 1903, now exhibited in the Larz Anderson Auto Museum

The collection was begun by Larz Anderson and Isabel Weld Perkins soon after they married. In 1899 they purchased a true "horseless carriage" made by the Winton Motor Carriage Company. In the following decades, the Andersons purchased at least thirty-two new motorcars. Their collection also included twenty-four horse-drawn carriages and six sleighs.

As their cars became obsolete, the Andersons retired them to the Carriage House of their 64-acre (26 ha) estate in Greater Boston. By 1927, the Andersons opened the Carriage House to the public for tours of their vehicles. When Isabel Anderson died in 1948, she bequeathed her entire Brookline estate (including mansion, carriage house, and land) to the Town of Brookline. She stipulated in her will that the motorcar collection be known as the "Larz Anderson Collection," and that a non-profit be given stewardship of the collection.

The Carriage House which the museum occupies was designed by the Boston architect Edmund M. Wheelwright and completed in 1888. Its design was heavily influenced by the Château de Chaumont-sur-Loire in France. Gigantic in scale, the building stored carriages, housed horses, and served as home to stable staff who lived on the upper floor. Soon after the Andersons began collecting automobiles, they added a garage on the basement level for vehicle repair.

Of the original thirty-two motor vehicles, the following fourteen remain in the collection:

In addition to some of the original horse-drawn carriages and sleighs owned by the Andersons or their Weld forebears, the museum is home to the vintage bicycle collection of Dr. Ralph W. Galen, a local cycling enthusiast.

The museum sponsors a variety of activities throughout the year that attract enthusiasts of specific motor vehicles from throughout the Northeastern United States, many of whom arrive in their own rare vehicles to a gathering of like-minded hobbyists.

The museum also attracts visitors with lectures on various subjects relating to transportation or local history, as well as musical entertainment in "The Carriage House Concert Series".

The Library and Archives at Larz Anderson Auto Museum are devoted to materials relating automobile, racing and motor transportation history. There are also some documents related to carriages, motorcycles and bicycles. The facility also houses an extensive archival holding of Packard Motor Company materials.

The library is a repository for information related to the state and to the Andersons themselves, including a collection of books, plays, and volumes of poetry authored by Isabel Anderson.

In 1971, in cooperation with the Veteran Motor Car Club of America, the Andersons' carriage house became known as the Museum of Transportation, under the direction of Duncan Smith. Smith led a young, enthusiastic staff at this location for six years. He was especially proud of a multi-media presentation chronicling the invention and refinement of the bicycle; it was then the only world-class history of the bicycle on exhibit in the United States. The museum's halls featured rotating exhibits of automobiles, motorcycles, carriages, and bicycles. The museum's collection of antique-auto newsreel footage broadened into a library of vintage movie comedies, displaying vehicles of the 1920s in motion. Museum visitors had the opportunity to see high-wheeled-bicycle demonstrations, and ride in a vintage-1937 fire engine named for Boston Pops conductor and firefighting-memorabilia enthusiast Arthur Fiedler.

The Museum of Transportation at Larz Anderson Park closed on December 31, 1977, and effected a partnership with The Children's Museum of Boston. The museum reopened in 1979, sharing space with The Children's Museum at Museum Wharf in downtown Boston, but the joint venture was short-lived and the antique-auto contingent returned to its Anderson Park home in the 1980s.

All content from Kiddle encyclopedia articles (including the article images and facts) can be freely used under Attribution-ShareAlike license, unless stated otherwise. Cite this article:
Larz Anderson Auto Museum Facts for Kids. Kiddle Encyclopedia.