A baseball park, baseball stadium, or ball park / ballpark is a place where baseball is played. It refers to the field of play, seating areas (if any) and any other things added to it.

The flexible rules about baseball fields (aside from the rigid rules of sizes of basepaths and pitcher's mound) allow ballparks to have their own character and quirks. This happens at all levels of baseball, amateur and especially professional. This makes each stadium interesting and unique.

The baseball field is a grassy field that is about 450 feet (140 m) or more in diameter, and is separated into the infield (the area nearest to the batter) and the outfield. 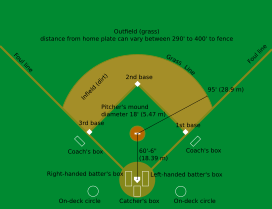 A diagram of the field dimensions.

The infield is a square (usually called a "diamond"), with each side being 90 feet (27 m) long. In each corner of the square, there is a "base", which is a square with sides of 15 inches (38 cm). One of the bases is called home base or home plate, and the sides of the square that touch home plate are extended beyond the two nearest bases until the outfield fence (which is 300 feet (91 m) or more away from home plate) to form the foul lines. Most of what happens in a baseball game happens in the area of the field in between the foul lines and the outfield fence, which is called fair territory. All other areas of the field (except the foul lines) are called foul territory.

Below is a list of all current ballparks for teams of major league baseball.

All content from Kiddle encyclopedia articles (including the article images and facts) can be freely used under Attribution-ShareAlike license, unless stated otherwise. Cite this article:
Baseball park Facts for Kids. Kiddle Encyclopedia.