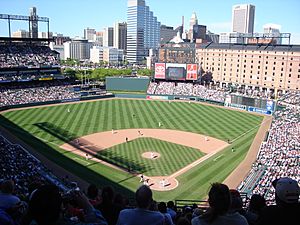 Oriole Park at Camden Yards is a baseball park in Baltimore, Maryland. It is the home field of the Major League Baseball team called the Baltimore Orioles. It opened in 1992, replacing the Orioles' long-time home Memorial Stadium.

The ballpark was built on the site of a railroad area called Camden Yards. The long brick building outside the right field area was part of that rail yard. The birthplace of Babe Ruth is also nearby. It is a museum which is a couple of blocks west of the ballpark.

All content from Kiddle encyclopedia articles (including the article images and facts) can be freely used under Attribution-ShareAlike license, unless stated otherwise. Cite this article:
Oriole Park at Camden Yards Facts for Kids. Kiddle Encyclopedia.