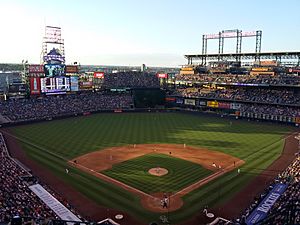 Coors Field is a baseball park located in downtown Denver, Colorado. It is the home field of the Colorado Rockies, the city's Major League Baseball (MLB) franchise. It is named for the Coors Brewing Company of Golden, Colorado, which purchased the naming rights to the park prior to its completion in 1995. The Rockies played their first two seasons, 1993 and 1994, in Mile High Stadium before moving to Coors Field, two blocks from Union Station in Denver's Lower Downtown neighborhood. The park includes 63 luxury suites and 4,526 club seats.

Coors Field was the first new stadium added in a six-year period in which Denver's sports venues were upgraded, along with Pepsi Center and Sports Authority Field at Mile High (originally sponsored by INVESCO). It was also the first baseball-only park in the National League since Dodger Stadium was built in 1962. 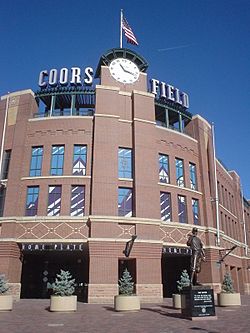 As with the other new venues, Coors Field was constructed with accessibility in mind. It sits near Interstate 25 and has direct access to the 20th Street and Park Avenue exits. Nearby Union Station also provides light rail access.

Coors Field was originally planned to be somewhat smaller, seating only 43,800. However, after the Rockies drew almost 4.5 million people in their first season at Mile High Stadium – the most in baseball history – the plans were altered during construction, and new seats in the right field upper deck were added.

The center field bleacher section is named "The Rockpile". During the 1993 and 1994 seasons when the team played at Mile High Stadium, which was a hybrid football/baseball venue, the Rockpile was located next to the south stands, which were in dead center field and very distant from home plate. The same design was incorporated into Coors Field, and is located in deep center field up high. The original Rockpile seats cost a dollar each.

During construction, workers discovered a number of dinosaur fossils throughout the grounds, including a 7-foot-long (2.1 m) 1,000-pound (450 kg) triceratops skull. Because of this, "Jurassic Park" was one of the first names to be considered for the stadium. This later led to the selection of a triceratops as the Rockies' mascot, Dinger.

Coors Field was the first major league park with an underground heating system. 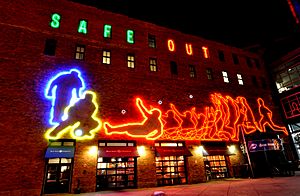 While most of the seats in Coors Field are dark green, the seats in the 20th row of the upper deck are purple to mark the elevation of one mile (1,609 m) above sea level.

The Blue Moon Brewery at The Sandlot is a microbrewery/restaurant that is behind the Right Field Stands, with an entrance from Coors Field, and from Blake Street. The brewery is operated by the Coors Brewing Company, and experiments with craft beers on a small scale. The Brewery has won multiple awards at the Great American Beer Festival in various categories. The popular Blue Moon, a Belgian-Style Wheat beer was invented here, and is now mass-produced by Coors. The restaurant is housed in a building that is attached to the stadium. Coors Field has an extensive selection of food items. Selections include Rockie dogs, Denver dogs, vegetarian dogs and burgers, and all of the usual ball park items.

Behind the center field wall is a landscape decoration that reflects the typical environment of the Rocky Mountains. This landscape area consists of a waterfall, fountains, and pine trees. After a Rockies home run or win, the fountains shoot high into the air.

The park has two large light emitting diode (LED) video displays and one ribbon display in the outfield from Daktronics. The top display, underneath the "Rockies" logo, measures 27 by 47 feet (8 m × 14 m). The second display measure 33 by 73 feet (10 m × 22 m) and is used to give lineups and statistics and as a scoreboard. The field also contains several Daktronics ribbon displays, totaling approximately 833 feet (254 m) in length.

After the close of the 2013 season, renovations began on the right field portion of the upper deck, converted into an outdoor party deck for 2014.

Reputation as a home run-friendly park

Stadium designers speculated early on that Coors Field would give up a lot of home runs. At 5,200 feet (1,580 m) above sea level, it is by far the highest park in the majors (Chase Field in Phoenix is next at 1,100 feet (340 m)), and designers knew that the low air density at such a high elevation would result in balls traveling farther than in other parks. To compensate, the outfield fences were placed at an unusually far distance from home plate, thus creating the largest outfield in Major League Baseball today, according to Business Insider. In spite of the pushed-back fences, for many years Coors Field not only gave up the most home runs in baseball, but due to the resultant large field area, the most doubles and triples as well. 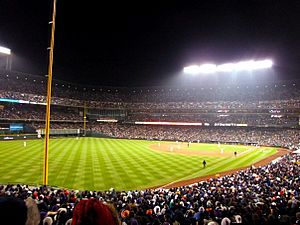 Coors Field sold out at night

In its first decade, the above-average number of home runs earned Coors Field a reputation as the most hitter-friendly park in Major League Baseball, earning the critical nicknames "Coors Canaveral" (a reference to Cape Canaveral, from where NASA launches spacecraft) and "Williamsport" (referring to the site of the Little League World Series, which has been traditionally dominated by batters). Prior to the 2002 baseball season, studies determined that it was more the dry air rather than thin air which contributed to the more frequent home runs. It was found that baseballs stored in drier air are harder and therefore more elastic to the impact of the bat. A room-sized humidor was installed in which to store the baseballs, and since its introduction the number of home runs at Coors Field has decreased and is now nearly the same as other parks.

Regardless of ball humidity, elevation is still a factor to the game. The ball does slip more easily through the thin air allowing for longer hits. In addition, the curveball tends to curve less with the thin air than at sea level leading to fewer strikeouts and fewer effective pitches for pitchers to work with.

Coors Field twice broke the major league record for home runs hit in a ballpark in one season. The previous record, 248, had been set at the Angels' original home of Wrigley Field in Los Angeles in 1961, its only year for major league ball. In Coors Field's first year, the home run total fell just 7 short of that mark, despite losing 9 games from the home schedule (or 1/9 of the normal 81) due to the strike that had continued from 1994. The next season, 1996, with a full schedule finally, 271 home runs were hit at Coors Field. In 1999, the current major league record was set at 303. The annual home run figure dropped noticeably in 2002, and has dropped below 200 starting in 2005.

Although the number of home runs hit per season at Coors Field is decreasing, Coors Field still remains the most hitter friendly ballpark in the Major Leagues by a wide margin. From 2012–2015 the Colorado Rockies led the league in runs scored in home games, while being last in the league for runs scored in away games. This demonstrates the extreme benefit that Coors Field's low air density provides to hitters.

There have been nine 1-0 games in Coors Field history, through the 2015 season. The first 1-0 game at Coors Field was on July 9, 2005, meaning all nine games have occurred since Major League Baseball allowed the Rockies to start using a humidor on May 15, 2002:

Panorama of Coors Field during Todd Helton's final home game. This was also the final game played at the stadium before the removal of part of the right field upper deck

Games 3 and 4 of the 2007 World Series between the Rockies and the Boston Red Sox were held at Coors Field. The Red Sox swept both games to win the title.

Coors Field also hosted two outdoor ice hockey games in February 2016. First, on February 20, the local Denver Pioneers defeated their arch-rival Colorado College 4-1 in a college match billed as the "Battle on Blake". Then, one week later on February 27, the Colorado Avalanche lost to the Detroit Red Wings 5-3 as part of the 2016 NHL Stadium Series.

The "Voice" of Coors Field

Alan Roach was the main PA announcer since Coors Field opened in 1995. In the spring preceding the 2007 Rockies season, Roach announced his retirement from his post at Coors Field to spend more time over the summer with his family. He did come back to substitute in 2008. Roach is also the PA announcer for the nearby Colorado Avalanche hockey team of the NHL and former PA announcer for the Denver Broncos of the NFL. He also provides voice-overs for local sports introductions in the region, in addition to hosting a local sports talk radio show. He is currently the PA Announcer for the Minnesota Vikings of the NFL. He is also one of the voices of the train system at Denver International Airport, and has also been heard as the PA announcer at recent Super Bowls. Reed Saunders, 23, was chosen to be the new voice of Coors Field on March 16, 2007.

Coors Field was featured in the movie The Fan (1996) starring Robert De Niro and Wesley Snipes. The ballpark was also featured in two episodes of South Park: "Professor Chaos" (2002) and "The Losing Edge" (2005).

All content from Kiddle encyclopedia articles (including the article images and facts) can be freely used under Attribution-ShareAlike license, unless stated otherwise. Cite this article:
Coors Field Facts for Kids. Kiddle Encyclopedia.