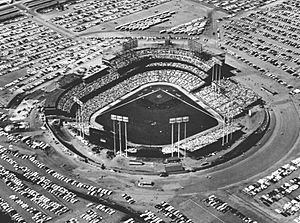 Metropolitan Stadium was a sports stadium in Bloomington, Minnesota. It opened in 1956 as the home of the local minor league baseball team, the Minneapolis Millers. It was made larger in 1961 so that it could be used for major league teams. In 1961, the Minnesota Twins moved from Washington, DC and the Minnesota Vikings began play at the stadium. It was replaced by the Metrodome in 1982, and was torn down in the mid-1980s.

The site of the stadium is now used by the Mall of America. When people talk about the ballpark nowadays, they often call it the "Old Met". The first floor of the Mall has a brass marker in the shape of a home plate, on the spot where the Old Met's home base once was.

All content from Kiddle encyclopedia articles (including the article images and facts) can be freely used under Attribution-ShareAlike license, unless stated otherwise. Cite this article:
Metropolitan Stadium Facts for Kids. Kiddle Encyclopedia.