Nickelodeon Universe is the name of two indoor amusement parks located at Mall of America in Bloomington, Minnesota and American Dream in East Rutherford, New Jersey, consisting of attractions and rides based on Nickelodeon’s popular franchises. The amusement parks are owned and operated by the Triple Five Group with licensing rights from Paramount Global, which owns Nickelodeon.

The park was originally known as Knott's Camp Snoopy, and later, simply Camp Snoopy, and was themed around the Charles M. Schulz Peanuts comic strip characters. Camp Snoopy themed areas are still located at Cedar Fair Amusement Company's parks. Camp Snoopy was never aggressively themed; the park had a very outdoors and woodsy feel with more subtle references to the Peanuts franchise. Much of the original theming in the Camp Snoopy fountain and all around the park was already toned down by the time the rights to the Peanuts characters were lost. Theming that was removed from the park prematurely and was never replaced includes various kites near the ceiling, Charlie Brown and Lucy playing baseball above the Sports Grill restaurant (although their baseball remained suspended in the air afterwards), theming in Snoopy fountain, the retheming of Snoopy Boutique, Snoopy Bouncer, the Snoopy Shop and much smaller theming. On April 7, 1998, New Horizon Kids Quest, Inc. opened a Kids Quest hourly child care facility in Knott's Camp Snoopy. It incorporated 17,385 square feet (1,615.1 m2) and served children ages six weeks to twelve years until its removal in 2007. It is now the "Dutchman’s Deck Adventure Course" ropes course, slides and zip line.

In 2005, there were plans to revitalize the Camp Snoopy image and a new logo was introduced in October, called the "roller coaster logo" to replace the "canoe logo". However, this did not last long, as there were even bigger and unexpected changes coming within the next few months.

The Park at Mall of America

On January 9, 2006, Mall of America management announced that talks between MOA and Cedar Fair (which owns the national rights to amusement-park branding of the Peanuts license) had broken down, primarily over the mall's rights to effectively market its park within and outside the United States, and effective January 19, the park's Peanuts branding would end, the park being temporarily renamed The Park at MOA while new branding was being applied. All traces of the Peanuts branding was removed, some very sloppily, although the gift shops were allowed to continue selling Peanuts merchandise without the Camp Snoopy label. The inflatable Snoopy character was removed and it took several months before it was finally replaced by a generic tree house inflatable. Many other landmarks in the park were either replaced by generic landmarks or not replaced at all. 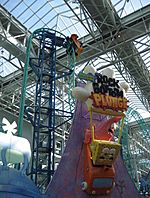 On November 2, 2005, Viacom filed a trademark for Nickelodeon Universe. The park's new licensing deal and name, "Nickelodeon Universe", was announced on July 25, 2007. Construction began on August 27, 2007, work was completed in sections so 80 percent to 90 percent of the park remained accessible at all times. Nickelodeon Universe was completed on March 15, 2008. New rides include SpongeBob SquarePants Rock Bottom Plunge, a Gerstlauer Euro-Fighter style coaster themed after the Nickelodeon show SpongeBob SquarePants, the Splat-O-Sphere, a tower drop-ride in the center of the park, the Avatar Airbender, a surf-rider attraction located in the center of the park as well and Brain Surge which is on the side of the park. The shooting gallery beneath the Ripsaw/Orange Streak roller coaster was gutted and was replaced by Rugrats Reptarmobiles. The Mystery Mine Ride was completely demolished to make way for SpongeBob SquarePants Rock Bottom Plunge. This site also included an Old Time Photography studio and restrooms. Old Time Photography relocated into the mall (but not within the park) and restrooms did not return in this section of the park. Levy Restaurants partnered with Nickelodeon Universe to include a themed restaurant at the park. The restaurant was called EATS and was located in the former Park at MOA food court. When the partnership ended, the EATS area closed and was replaced with a butterfly display. In 2014, a Hard Rock Cafe opened on the site where EATS once stood.

On March 12, 2008, the Star Tribune reported that the price of ride points, daily wristbands and, in particular, annual passes, would take a significant price hike once the park transitioned to Nickelodeon Universe. The price for an annual pass, which had remained $99 per year since the park opened in 1992, would increase to $250, and daily wristbands would be raised from $24.95 to $29.95. They eventually rose to $32.99 in 2014. In 2017, prices rose to where they currently stand, at $35.99 for a daily wristband. In April 2015, the price for the annual pass dropped to $139. In November 2021, Nickelodeon Universe announced the new annual pass program which has 3 different annual passes: Level 1 is Explorer which costs $175 but only valid on the weekdays, which is Monday through Thursday, Level 2 is Adventurer costs $250 but only works on any day of the week & Level 3 is Thrill Seeker costs $350 and it has all access all the time. Some denounced the price increases as being unjustifiably high when compared to other parks, such as local park Valleyfair at $79.95–$99.95. Others defended the pricing as necessary to accommodate the millions of dollars of investment needed to rebrand the park as Nickelodeon Universe.

On March 17, 2020, Nickelodeon Universe closed along with the rest of Mall of America in response to the COVID-19 pandemic. While the mall re-opened in June, Nickelodeon Universe didn't re-open until August. As a result of restrictions put in place by the Minnesota state government, Nickelodeon Universe was only permitted to re-open to a capacity of 250. Thus, the previous ticketing model—where entry to the park was free and patrons could either pay for rides individually, or unlimited–ride tickets that valid for the entire day—was temporarily suspended. Patrons then had only the option of a ticket that was valid for two hours from when it was first scanned at a ride; persons not riding were required to have a paid ticket to enter the park, albeit at a reduced cost. Capacity restrictions eventually loosened into the spring, resulting in the return of all-day unlimited-ride wristbands and point passes. The park reopened to full capacity on May 28, 2021.

In September 2016, the Triple Five Group announced that a second Nickelodeon Universe amusement park would fill the 8-acre indoor amusement park space at American Dream, which will feature two world record-holding roller coasters. TMNT Shellraiser, a Gerstlauer Euro-Fighter, would hold the record for the steepest roller coaster drop at 121.5 degrees, and is based on a model seen in Japan. The second coaster, a spinning coaster called the Shredder, consists of four-passenger cars that spin on a vertical axis as it progresses down the coaster's track, and is the world's tallest and longest free spinning coaster, at 1,600 feet.

On March 13, 2020, Triple Five announced that the mall would be closed due to the COVID-19 pandemic, and the opening of retail shops and DreamWorks Water Park would be pushed.

Finally after 4 months, on September 3, 2020, Triple Five announced that on October 1, American Dream would reopen its amusement park, water park, ice rink, and mini-golf arcade, each of which would limit patrons to 25% of capacity.

A third Nickelodeon Universe theme park is currently under construction for the Mall of China (Chongqing, China). Concept artwork that was released during the theme park's announcement on July 26, 2018 showcases rides that are at the American Dream location, as well as a drop-tower ride themed to Jimmy Neutron. Construction was briefly paused in March 2020 due to the COVID-19 pandemic. While the theme park was originally slated for a December 2020 opening, its construction status and a new opening timeframe are unknown.

All content from Kiddle encyclopedia articles (including the article images and facts) can be freely used under Attribution-ShareAlike license, unless stated otherwise. Cite this article:
Nickelodeon Universe Facts for Kids. Kiddle Encyclopedia.