Kauffman Stadium, often called "The K", is a baseball park located in Kansas City, Missouri, that is home to the Kansas City Royals of Major League Baseball (MLB). It is part of the Truman Sports Complex together with the adjacent Arrowhead Stadium, home of the Kansas City Chiefs of the National Football League. The ballpark is named for Ewing Kauffman, the founder and first owner of the Royals. It opened in 1973 as Royals Stadium and was named for Kauffman on July 2, 1993. The ballpark's listed seating capacity since 2009 is 37,903.

Kauffman Stadium was built specifically for baseball during an era when building multisport "cookie-cutter" stadiums was commonplace. It is often held up along with Dodger Stadium in Los Angeles as one of the best examples of modernist stadium design. It is currently the only ballpark in the American League to be named after a person and is also one of ten stadiums in Major League Baseball that does not have a corporate-sponsored name.

The stadium is the sixth-oldest stadium in Major League Baseball and has hosted the 1973 and the 2012 MLB All-Star Games, along with Royals home games during the 1980, 1985, 2014, and 2015 World Series. Between 2007 and 2009, Kauffman Stadium underwent a $250 million renovation, which included updates and upgrades in fan amenities, a new Royals hall of fame area, and other updates throughout the facility. 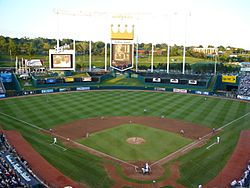 Kauffman Stadium as it appeared prior to 2009 renovations

Although it is a baseball-only facility, its design took several stylistic cues from the multi-purpose stadiums of the day, plus the Googie style that was more prevalent in the decades prior. The main stadium itself is primarily concrete, with a smooth, uncovered concrete facade. The stands wrap around the infield and end at the foul poles, with smaller bleacher sections (or "outfield plazas", as the Royals call them) in the outfield. The upper deck is quite steep, though not as high as other parks built during this time. Many minor-league stadiums built in the 1980s and early 1990s, as well as Guaranteed Rate Field in Chicago, employ a similar design. 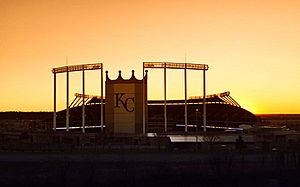 By 2000, all of the seats were replaced by blue seats, the lower section seating also getting cupholders.

The park's best-known feature is the fountain and waterfall display (known as the Water Spectacular) behind the right-field fence. At 322 feet (98 m), it is the largest privately funded fountain in the world. The fountains are on display before and after the game and in-between innings, while the waterfalls are constantly flowing. 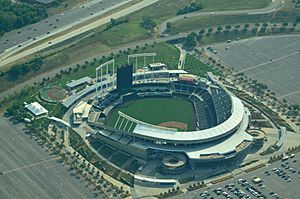 On April 4, 2006, Jackson County, Missouri voters approved a 0.375% sales tax increase to fund plans to renovate the Truman Sports Complex. As part of this measure, every Jackson County residential address was to receive vouchers good for 50% off two tickets at Royals games on certain nights. The construction began with a ceremonial groundbreaking inside Kauffman Stadium on October 3, 2007, with completion of Kauffman Stadium in time for Opening Day in 2009, and full renovation of the complex by 2010. The improvements to Kauffman Stadium included the following: 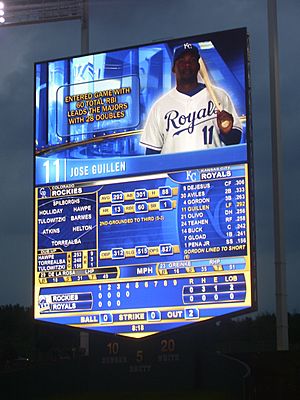 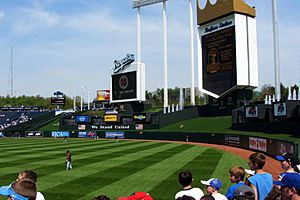 Scoreboard and fountains from the seats in Right Field

The new high-definition scoreboard was one of the first features to be installed. It replaced both the old matrix board in the shape of the Royals logo that had been in the park since its opening, along with the video board that had been installed in 1989. The new scoreboard was ready for Opening Day 2008. It is 84 ft. wide and 105 ft. tall, and was, at the time it entered service, the largest high-definition LED display in the world. The video scoreboard alone cost $8.3 million, and the control room that operates it is staffed with 17 people on game days. It was adorned with a crown during the 2008 offseason. Strobe lights atop the scoreboard flash after every Royals home run.

All content from Kiddle encyclopedia articles (including the article images and facts) can be freely used under Attribution-ShareAlike license, unless stated otherwise. Cite this article:
Kauffman Stadium Facts for Kids. Kiddle Encyclopedia.