Cabarrus County ( kə-BARR-əs) is a county located in the south-central part of the U.S. state of North Carolina. As of the 2010 census, the population was 178,011. The county seat is Concord, which was incorporated in 1803.

Among its significant historic sites is the Reed Gold Mine, a National Historic Landmark. The first gold discovered in the United States was found here in 1799, resulting in a gold rush in the early 1800s.

While some cotton plantations were established, most of the land was developed for subsistence farming. By 1860 the population consisted of about one-third enslaved African Americans, with few free people of color. Industrialization had started before the war with the introduction of textile mills to process the cotton. More mill development took place, especially after the railroad was constructed to the town. Coleman Manufacturing Company, started in 1897, is believed to be the first cotton mill in the nation to be built, owned and operated by African Americans. It was owned by Warren Clay Coleman from Concord, John C. Dancy (federal collector of customs), and seven partners primarily from Wilmington, North Carolina. Investors included Washington Duke and capitalists in other parts of the state. Textile manufacturing continued to be integral to the regional economy until the later 20th century. In 2015 the Coleman-Franklin-Cannon Mill was listed on the National Register of Historic Places.

The county was formed on December 29, 1792 from Mecklenburg County. Located in the Piedmont, it was named after Stephen Cabarrus of Chowan County, speaker of the North Carolina House of Commons.

Beginning about 1750, the county was settled mainly by immigrants: Germans on the eastern side and Scotch-Irish in the western area of the county. When it came time to choose a location for the county seat and county government, each ethnic group wanted the county seat located close to their populations and could not reach agreement on a site. Stephen Cabarrus wrote to the citizens pleading with them to come together in peace to choose a location for their county seat. A central area of the county was chosen in 1796 and aptly named Concord, a derivative of two French words "with" and "peace." Representative Paul Barringer introduced a bill into the state legislature to incorporate Concord; it passed on December 17, 1806. The town of Concord was begun on land owned by Samuel Huie and wife Jane Morrison Huie.

The first substantiated gold find in America was in 1799 by young Conrad Reed while playing in Little Meadow Creek, located on the Reed farm in southeastern Cabarrus County. According to research, Conrad's find was a gold chunk approximately the size of a shoe and weighing 17 pounds. His father John Reed took the nugget into Concord to a silversmith, who informed Reed that the rock did not have any value. The elder Reed returned home with it, holding it for three years until a trip in 1802 to Fayetteville, where he sold the "nugget" to a jeweler for $3.50. Over time John Reed learned that the jeweler sold the large nugget for several thousand dollars. Reed returned to Fayetteville insisting on more just compensation. This discovery and news of the sale spurred the beginning of gold mining in the area.

John Reed, or Johannes Rieth as he is known in records of the Staatsarchiv at Marburg, Germany, was one of thousands of Hessian soldiers brought over by British troops to fight against rebellious colonists in the American Revolution. Reed deserted, as did many other Hessians. He traveled from Georgia to North Carolina, where he settled in an ethnic German community sometime around 1787 and began farming.

Reed first developed placer mining on his property, then underground mining, and became wealthy from the gold. His facility became known as Reed's Gold Mine. Large amounts of gold were being discovered at the Reed Gold Mine and in other mines in the United States; these mine owners began to use their gold to create currency. In order for the government to retain control of the production of currency and keep a stabilized economic structure, President Andrew Jackson signed into legislation the authorization to create branches of the US Mint. The Charlotte Mint was built to handle the gold coming from the rich gold veins of North Carolina, including Reed's.

The Reed Gold Mine was designated a National Historic Landmark, as it was the first gold mine in the country. Gold was mined in North Carolina into the early 20th century. Today visitors at the site can explore some of the mine's reconstructed tunnels.

Located in the Piedmont region, the county became a site of industrialization with cotton mills constructed in the late 19th century. Among the owners of the new mills in the area were men of the rising black middle-class of Wilmington, North Carolina, such as Warren C. Coleman, John C. Dancy (appointed as collector of customs at the port), and others. They organized Coleman Manufacturing Company in 1897, on a site about two miles from Concord. They built and operated what is believed to have been the first cotton mill in the nation to be owned by blacks. They hoped to promote economic security for people of color. Richard B. Fitzgerald was its first president. But the Wilmington Insurrection of 1898, with white attacks on blacks, their homes and businesses, destroyed much of what the people had built there since the war. In 1900 Dancy was among more than 2000 blacks who left the city permanently after the riot, resulting in its becoming majority white. He moved to Washington, DC, appointed as the federal Recorder of Deeds.

The old Cabarrus County Courthouse was finished in 1876. Recognized as significant in the 20th century, it was listed on the National Register of Historic Places in 1974. The Confederate soldiers monument is located on the front lawn area.

Cabarrus County is situated in the gently rolling countryside of the Carolina Piedmont There are no significantly high peaks or points, although the eastern half of the county contains the westernmost foothills of the Uwharrie Mountains. Altitude ranges from approximately 500–800 feet above sea level. No large or navigable rivers flow through the county; the nearest navigable waterway is the Yadkin River in nearby Rowan County. Land slope is generally toward the southeast. The longest waterway within the county is Rocky River, which rises in Iredell County and empties into the Pee Dee below Norwood in Stanly County. Weather is temperate with hot summers and mild to chilly winters. Severe weather occurs occasionally, with thunderstorms in the warmer months of the year and ice storms and snowfalls occurring on occasion in winter. From zero to three accumulating snowfalls may be expected in an average winter. Snow generally melts between accumulating snowfalls, and there is no consistent snowpack. An average of four inches (102 mm) of snow and 46 inches (1,200 mm) of rain falls each year. At summer solstice, the length of day is approximately 14 hours and 33 minutes, with visible light lasting 15 hours and 32 minutes.

Most residents of Cabarrus County are Caucasian of Scots-Irish, German, or English-Welsh extraction. The proportion of African-American residents has decreased since the late nineteenth century, in part due to people leaving in the Great Migration of the 20th century to cities and areas with more opportunities. In 2000, African- American residents made up slightly more than 12 percent of the population.

The different religious denominations represented in the county are mainly Protestant. A small Jewish synagogue, Temple Or Olam, operates here. There are two Catholic churches, St. James The Greater Catholic Church, located in Concord, and St. Joseph's Catholic Church in Kannapolis. Eastern Orthodox and Islamic congregations are located in nearby Charlotte. 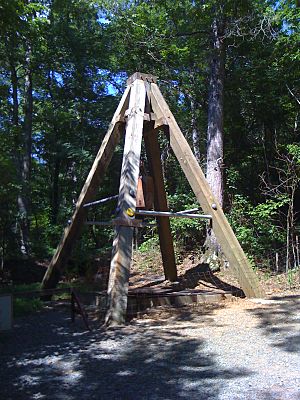 Essential services, including Carolinas Medical Center-NorthEast with a 24-hour emergency department and trauma center, are available in Concord. There are no VA hospitals or military installations in the county.

The state's largest tourist attraction, Concord Mills Mall, is located in Cabarrus County. The Great Wolf Lodge is located near the mall on the opposite side of Interstate 85.

The county is home to Reed Gold Mine, site of the first gold discovery in the United States in 1799.

Self-branded as the Center of American Motorsports, Cabarrus County is rich in NASCAR history.

A state of the art and first of its kind wind tunnel, Windshear, opened July 18, 2008 in Concord. It offers aerodynamic testing facilities to NASCAR and Formula One racing teams and automobile manufacturers. 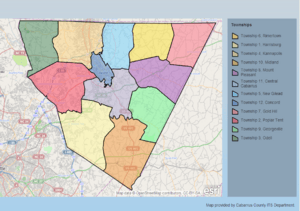 The county is divided into twelve townships, which are both numbered and named:

There has been a push for incorporation in the Odell School community, which is located in the northwestern corner of the county. The current residents hope to incorporate as a means to avoid annexation by the city of Kannapolis.

The Cabarrus County School System services all of the county with the exception of parts of Kannapolis, which operates the Kannapolis City Schools. The system is generally regarded as one of the better school districts in the state, with high student achievement and low instances of violence and other problems.

The county is also home to Barber-Scotia College, the Cabarrus College of Health Sciences (a four-year college), and a branch of Rowan-Cabarrus Community College. UNC Charlotte, although in Mecklenburg County, is located near Harrisburg and is easily accessible to Cabarrus residents via Highway 49.

Cabarrus County citizens are served by the Cabarrus County Public Library system, which comprises four library locations and a fifth structure to be built in the town of Midland.

Concord Regional Airport (airport code JQF) is located seven miles (11 km) west of Concord. Commercial flights to the area are available at the airports at Charlotte, or at Greensboro, North Carolina. Passenger rail service to Kannapolis is available via Amtrak.

All content from Kiddle encyclopedia articles (including the article images and facts) can be freely used under Attribution-ShareAlike license, unless stated otherwise. Cite this article:
Cabarrus County, North Carolina Facts for Kids. Kiddle Encyclopedia.