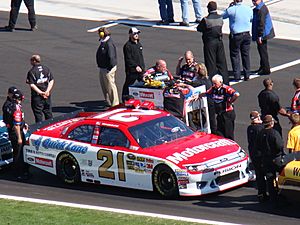 The 2011 Daytona 500 took place on February 20th 2011 at the Daytona International Speedway. It was the first race of the 2011 NASCAR Sprint Cup Series. Dale Earnhardt, Jr. won the pole in qualifying, however he did not start in 1st place because he crashed his car during practice. The race was won by Trevor Bayne. At 20 years old, he is the youngest driver to win the race.

All content from Kiddle encyclopedia articles (including the article images and facts) can be freely used under Attribution-ShareAlike license, unless stated otherwise. Cite this article:
2011 Daytona 500 Facts for Kids. Kiddle Encyclopedia.