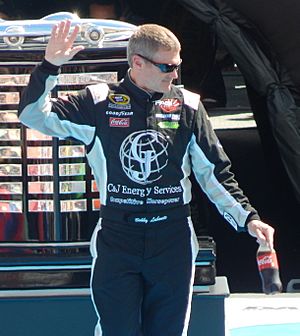 Robert Alan Labonte (born May 8, 1964) is an American race car driver in the Sprint Cup series. Labonte has driven many different cars in 2010, and he drove the #47 JTG Daugherty Racing Toyota Camry in 2011. He used to race for Joe Gibbs Racing and won one Sprint Cup championship with Joe Gibbs.

All content from Kiddle encyclopedia articles (including the article images and facts) can be freely used under Attribution-ShareAlike license, unless stated otherwise. Cite this article:
Bobby Labonte Facts for Kids. Kiddle Encyclopedia.