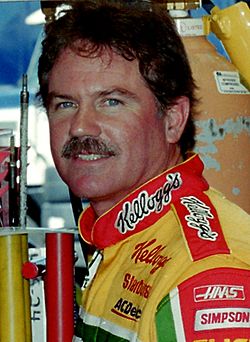 Terrance Lee "Terry" Labonte (born November 16, 1956) is a former NASCAR Winston Cup Series retired American racecar driver. Labonte was introduced to racing by his father, who worked on racecars as a hobby. He is a brother of former driver Bobby Labonte, and the father of NASCAR Winston Cup Series driver Justin Labonte. He appeared in the 1983 Burt Reynolds movie, Prism Motorsporter Ace. In 1984, he portrayed a crewman from the movie The Dukes of Hazzard. In 2000, he appeared in a Denny's commercial.

Labonte started racing when he was 7 years old, and won a national championship at age 9, before moving on to the short tracks as a teenager. He won short track championships as a child, driving on both dirt and asphalt, in Houston and San Antonio from 1975-1977. During this time, he also met Louisiana businessman Billy Hagan. Hagan offered Labonte a job on his Winston Cup team along with the promise to drive five races that year.

Labonte's first NASCAR race came in at Darlington Raceway, racing the #92 Duck Industries Chevrolet. He qualified 19th in the Duck Industries Chevy and finished fourth that weekend. He ran four more races that season and had additional two top-ten finishes. In 1979, he competed for NASCAR Winston Cup Rookie of the Year along with the late Dale Earnhardt, Harry Gant and Joe Millikan, driving the #44 Stratagraph Chevrolet for Hagan Racing, In 1980, he had his first win for the Southern 500. While Labonte failed to win the top rookie of the year award, he was one of the rookies to finish the Top 10 in points. He ended the season with 13 Top 10 finishes, The following year, Labonte won the Labor Day weekend race, the Southern 500 at Darlington Raceway. He won $222,501 and finished sixth in final points. In 1984, He portrayed an unnamed pit crewman on the CBS series, The Dukes of Hazzard.

Labonte failed to return to victory lane over the next few years, but did not finish outside the top five in points. He won his second career race in 1983 in the Budweiser Chevy, In 1984, his team received sponsorship from Piedmont Airlines and he won at Riverside International Speedway and Bristol Motor Speedway the following year, clinching his first NASCAR Winston Cup Series championship. He dropped to seventh in final points in 1985. The same season, he own in his Busch Series debut at Charlotte in the #17 Pontiac for Darrell Waltrip.

After Labonte fell back to 12th in standings, he announced that he was leaving Hagan to drive the #11 Budweiser Chevy for Junior Johnson and Associates. In his first season with the team, he won four poles and the Holly Farms 400, rising up to third in standings, following that up with a fourth-place finish in 1988. In 1989, the team switched to Ford Thunderbirds. Despite two wins during the season, he fell back to tenth in the championship, causing him to leave the team.

He made plans to field his own team in 1990, but promised involvements fell through at last minute.

In 1990, he signed with the #1 Skoal Classic Oldsmobile team for Precision Products Racing. He had four Top 5 spots in the points standings. He came back to Hagan to drive the #94 Sunoco Oldsmobile in 1991. While he failed to go to victory lane, he won the first pole in 1998 at Watkins Glen International. In 1993, the team switched to the Kellogg's and Chevrolet. He began in 1992 without a finish inside the top 8 in the first eight races. He had a total of four top five finishes, and ended the sesason with eighth in points. For the first time in his career, he failed to finish in the top five and he dropped to eighteenth in points.

After Labonte left Hagan in 1993, he joined Hendrick Motorsports in 1994, where he started driving the #5 Kellogg's-sponsored Chevrolet Lumina and responded by notching three wins in each for his first two wins there. In 1995, the team switched to Chevrolet Monte Carlos. In 1996, he broke Richard Petty's streak for consecutive races ended after winning at North Wilksboro. Despite winning only two races, Labonte went on to win the championship that year as well, a record-setting of twelve years after his first. Driving while having a broken hand during the last two races of the season, Labonte's younger brother Bobby Labonte performed a dual victory laps at Atlanta Motor Speedway for the final day of the season; Bobby won the race and Terry won the championship, the only driver to win the race as a sibling won the championship. He also appeared in the Denny's Restaurant commercial in 2000.

Labonte posted twenty top-ten finishes in 1997, but did not win until the fall race at Talladega Superspeedway.

In 1998, Labonte was able to win the Pontiac Exitement 400 but dropped to ninth in points. Despite a win at his home track at Texas Motor Speedway and the The Winston in 1999, Labonte finished 12th in standings, the first time he finished outside of the top 10 points since 1993. The year 2000 saw Labonte's consecutive start break be broken after he had an ear infection at the Pepsi 400, and was forced to miss the Brickyard 400 and Global Crossing @ The Glen. He began in 2001 with two top-six finishes in the first seven races but he had the worst finish of his career at the time when he finished 23rd in final points. He dropped back to 24th in 2002.

In 2003, Labonte went on to win his first pole at Richmond, and his last win at Darlington Raceway after leading 33 laps. He was unable to finish in the top five in 2004, and after a 26th-place finish. He announced that 2004 would be his last year at the circuit, and would run part-time schedules for the next cheerleaders. He borrowed the #44 from Petty Enterprises, and ran Hendrick's #44 Research & Development car with a sponsorship of Kellogg's, Pizza Hut, and GMAC. His best finish in the #44 came at Pocono Raceway, where he finished 12th. He also drove the #11 FedEx Chevrolet for Joe Gibbs Racing part time, following the release of Joe Gibbs Racing, finishing ninth at Richmond.

Labonte's finishes in those left the team with 30th in points, sealing a spot for the team in each race as as long they stay in the top 35, Tony Raines took over the #96 car and is expected to run in the rest of the series, is expected to run the rest of the races, except road course races at Sonoma Raceway and Watkins Glen International. His best finish thus far began at Sonoma, where he finished third, Labonte's last race was to be at Texas Motor Speedway, Michael Waltrip hired him to drive the #55 NAPA Toyota for the road courses races in 2007.

In 1988, the senior Labonte was named as the NASCAR's 50 Greatest Drivers. A park was renamed for the Labonte brothers in their hometown of Corpus Christi in 2001, and they were chosen an entry into the Texas Sports Hall of Fame in 2002. Labonte supports a variety of charities and due to his efforts, the Ronald McDonald House in Corpus Christi, the Victory Junction Gang Camp, and the Hendrick Marrow Program had been benefited. In 2016, He was inducted into the NASCAR Hall of Fame.

Labonte has lived in Thomasville, North Carolina, area for most of his career, Terry and Kim Labonte married in 1978. During his first year with Billy Hagan, where worked while they was in high school in Texas, they have two children who have grown up around racing, just as Labonte did years ago, Justin Labonte, born in 1981, was a late model champion at Caraway Speedway in 2003 and raced a limited Busch Series schedule in 2004 (including a win at Chicagoland Speedway in July) with a sponsorship for the Coast Guard, That sponsor expanded to a full schedule in 2005, Kristy, born in 1983, graduated with a business marketing major from High Point University.

In addition to 22 races in Cup, Labonte has won 11 races in Nationwide, and 1 in the Craftsman Truck Series. He has been the champion for the 24 Hours at Daytona and the 12 Hours of Sebring as well as three all star races, the Busch Clash (now the Advance Auto Parts Clash), and the Winston in 1985 (now the Monster Energy NASCAR All Star Race) in 1998 and 1999. He also won the IROC championship in 1989. Including his two championship seasons, he has finished in the top 10 in year-end standings 17 times, and his top 10 totals approach 25% and 50%, respectively of his total races.

All content from Kiddle encyclopedia articles (including the article images and facts) can be freely used under Attribution-ShareAlike license, unless stated otherwise. Cite this article:
Terry Labonte Facts for Kids. Kiddle Encyclopedia.