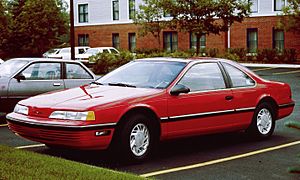 The Ford Thunderbird is an American car manufactured by the Ford Motor Company starting in 1955. The Thunderbird was also known as the T-Bird. The car was often used in NASCAR races.

John Denver recorded a song in 1986 called "Along for the Ride", about the 1956 Thunderbird. The words and music were by Danny O'Keefe and Bill Braun. The Beach Boys had a big hit with the song "Fun Fun Fun" which also was about the Thunderbird.

All content from Kiddle encyclopedia articles (including the article images and facts) can be freely used under Attribution-ShareAlike license, unless stated otherwise. Cite this article:
Ford Thunderbird Facts for Kids. Kiddle Encyclopedia.