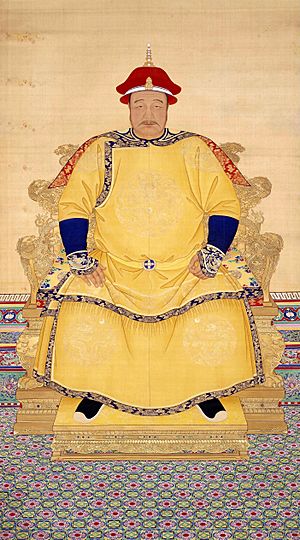 Huang Taiji (Chinese: 皇太極; 1592 - 1643) was the emperor of Qing Dynasty. His surname was Aisin Gioro. His reign names were Tian Cong and Chong De. Huang Taiji was the eighth son of Taizu Emperor (Nurhaci). He reigned the Manchu trible from 1627 until 1643.

In 1612, Huang Taiji followed his father, Nurhaci, to attack Wu La. He was awarded Beile, a traditional title of Manchu nobility below prince. In 1616, he was ordered to deal with government affairs with another Beili, Dai Shan. Huang became the Khan (King) of the Manchu trible in n 1626.

In 1636, Huang took control of the southern part of Mongol, the north-eastern part of China and Korea. He started the Qing Dynasty. Huang Taiji died in 1643 of apoplexy.

All content from Kiddle encyclopedia articles (including the article images and facts) can be freely used under Attribution-ShareAlike license, unless stated otherwise. Cite this article:
Huang Taiji Facts for Kids. Kiddle Encyclopedia.