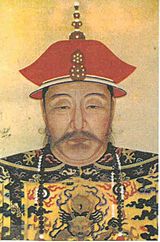 Taizu Emperor (Chinese: 清太祖, 1559 - 1626) was the founding father of the Qing Dynasty. His name was Nurhaci and Aisin Gioro was his surname. The reign name was Tian Ming. Nurhaci was Manchurian. He was also the creator of the Manchu alphabet.

In 1580, Nurhaci became the Jian Zhou general of the Ming Dynasty. He unified the Manchu tribe and organised the Eight Banners.

In 1616, Nurhaci declared himself Khan (King) and founded the Jin Dynasty in Liao Ling.

In 1618, in order to encourage people to against the Ming Dynasty. Nurhaci wrote an article called the Seven Great Vexations and sent it to the public.

Form 1618 until 1622, Nurhaci led armies to against the Ming Dynasty. He successfully occupied 70 cities in the north-eastern part of China. The capital was changed to Liao Yang after several battles.

All content from Kiddle encyclopedia articles (including the article images and facts) can be freely used under Attribution-ShareAlike license, unless stated otherwise. Cite this article:
Taizu Emperor Facts for Kids. Kiddle Encyclopedia.