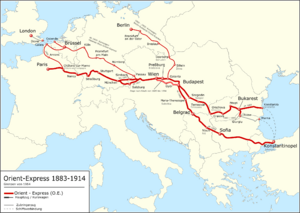 In 1977, the Orient Express stopped serving Istanbul. Its immediate successor, a through overnight service from Paris to Bucharest—since 1991 only to Budapest, and in 2001 again shortened to Vienna—ran for the last time from Paris on Friday, June 8, 2007. After this, the route, still called the "Orient Express", was shortened to start from Strasbourg instead, occasioned by the inauguration of the LGV Est which afforded much shorter travel times from Paris to Strasbourg. The new curtailed service left Strasbourg at 22:20 daily, shortly after the arrival of a TGV from Paris, and was attached at Karlsruhe to the overnight sleeper service from Amsterdam to Vienna.

On 14 December 2009, the Orient Express ceased to operate and the route disappeared from European railway timetables, reportedly a "victim of high-speed trains and cut-rate airlines". The Venice-Simplon Orient Express train, a private venture by Belmond using original CIWL carriages from the 1920s and 1930s, continues to run from London to Venice and to other destinations in Europe, including the original route from Paris to Istanbul. The Orient Express is the name for a passenger train (and its route). Originally it ran from Paris to Istanbul. The final service was an overnight train between Strasbourg and Vienna (it joined with the sleeper from Amsterdam in Karlsruhe). The service ended in 2009.

All content from Kiddle encyclopedia articles (including the article images and facts) can be freely used under Attribution-ShareAlike license, unless stated otherwise. Cite this article:
Orient Express Facts for Kids. Kiddle Encyclopedia.