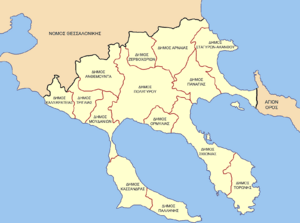 Chalkidiki, also known as Halkidiki or Chalcidice, is one of 51 prefectures of Greece in the region of Macedonia. It is the area of the ending of Central Macedonia which accesses deeply in the Aegean Sea forming three small peninsulas. The capital of Chalcidice is the Polygyros.

All content from Kiddle encyclopedia articles (including the article images and facts) can be freely used under Attribution-ShareAlike license, unless stated otherwise. Cite this article:
Chalkidiki Facts for Kids. Kiddle Encyclopedia.