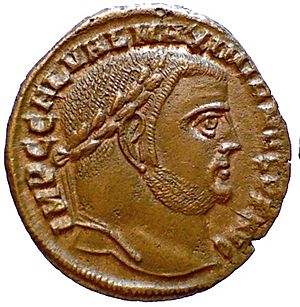 Galerius served as a soldier with distinction. He became Caesar in 293 along with Constantius Chlorus, when the Tetrarchy was introduced by Diocletian. He married Diocletian's daughter Valeria, and took over the care of the Illyrian provinces.

In 296, at the beginning of the Persian War, he moved from the Danube to the Euphrates. There his first campaign ended in a defeat by Narses, near Callinicum, which caused the loss of Mesopotamia.

Diocletian came to Antioch, where the official version of events was made clear: Galerius was to take all the blame. In Antioch, Diocletian forced Galerius to walk a mile in advance of his imperial cart while still clad in the purple robes of an emperor.p17p292/3 The message conveyed was clear: the loss at Carrhae was not due to the failings of the empire's soldiers, but due to the failings of their commander, and Galerius' failures would not be accepted.

In 298 Galerius got reinforcements from the Danube in the Spring. He led the army to attack Narseh in northern Mesopotamia, and Narseh retreated to Armenia.

The rugged Armenian terrain was favorable to Roman infantry, but unfavorable to Sassanid cavalry. Local aid gave Galerius the advantage of surprise over the Persian forces, and, in two successive battles, Galerius secured victories over Narseh.

During the second encounter, Roman forces seized Narseh's camp and his treasury. Narseh's wife would live out the remainder of the war in Daphne, a suburb of Antioch, serving to the Persians as a constant reminder of Roman victory. Galerius advanced into Media and Adiabene, winning victories, particularly near Erzurum, and securing Nisibis (Nusaybin, Turkey) before 1 October 298. He moved down the Tigris, taking Ctesiphon, and looking at the ruins of Babylon, before returning to Roman territory via the Euphrates.

Narses asked for peace. Mesopotamia was returned to Roman rule and even some territory east of the Tigris, which marks the greatest extension of the Roman Empire in the east.

In 305, on the abdication of Diocletian and Maximian, Galerius got the title of Augustus, together with Constantius, his former colleague. Two younger men were appointed as Caesars: Maximus Daia and Severus II.

His hopes were dashed when his colleague Constantius died at York in 306 and the legions elevated his son Constantine to the position of Augustus. Galerius only discovered this when he got a letter from Constantine, who told him of his father's death, modestly asserted his natural claim to the succession, and respectfully lamented that the enthusiasm of his troops had not allowed him to get the Imperial purple in a regular manner. The first emotions of Galerius were those of surprise, disappointment, and rage; and, as he could seldom restrain his passions, he threatened to burn both the letter and the messenger.

But when he had time to reconsider his position, he realised his chances of winning a war against Constantine was doubtful. Therefore, without commenting on the choice of the British army, Galerius accepted the son of his deceased colleague as the ruler of the provinces beyond the Alps; but he gave him only the title of Caesar, and the fourth rank among the Roman princes, whilst he conferred the vacant place of Augustus on his favourite, Severus II.

Suddenly Galerius had the unexpected loss of Italy to Maxentius. Galerius’ need for additional revenue led him to make a strict and rigorous examination of the property of his subjects for the purpose of taxation. A survey was taken of their estates; and, wherever there was the slightest suspicion of concealment, torture was used to obtain a sincere declaration of their personal wealth.

Italy had traditionally been exempt from any form of taxation, but Galerius ignored this. Italy began to murmur against this indignity and Maxentius used this sentiment to declare himself emperor in Italy, to the fury of Galerius. Therefore, Galerius ordered his colleague Severus to immediately march to Rome, so that, by his unexpected arrival, he would easily suppress the rebellion. Severus was quickly captured and executed by Maximian, who had once again been elevated to the rank of co-emperor, this time by his son Maxentius.

The importance of the occasion needed the presence and abilities of Galerius. At the head of a powerful army collected from Illyricum and the East, he entered Italy, determined to revenge the death of Severus and to punish the rebellious Romans. But due to the skill of Maximian, Galerius found every place hostile, fortified, and inaccessible; and though he forced his way as far as Narni, within sixty miles of Rome, his control in Italy was confined to the narrow limits of his camp.

Seeing that he was facing difficulties, Galerius made the first advances towards reconciliation. and dispatched two officers to tempt the Romans by the offer of a conference. The offers of Galerius were rejected with firmness, his friendship refused. Unless he retreated, he might meet the fate of Severus. It was not a moment too soon; large monetary gifts from Maxentius to his soldiers had corrupted the fidelity of the Illyrian legions. When Galerius began his withdrawal from Italy, it was only with great difficulty that he managed to stop his veterans deserting him.

In frustration, Galerius allowed his legions to ravage the countryside as they passed northwards. Maxentius declined to make a general engagement.

With so many emperors now in existence, in 308 Galerius, together with the retired emperor Diocletian and the now active Maximian, called an imperial 'conference' at Carnuntum on the River Danube to rectify the situation and bring some order back into the imperial government. Here it was agreed that Galerius’ long-time friend and military companion Licinius, who had been entrusted by Galerius with the defense of the Danube while Galerius was in Italy, would become Augustus in the West, with Constantine as his Caesar. In the East, Galerius remained Augustus and Maximinus remained his Caesar. Maximian was to retire, and Maxentius was declared a usurper.

Galerius’ plan soon failed. The news of Licinius’ promotion was no sooner carried into the East, than Maximinus, who governed, the provinces of Egypt and Syria, rejected his position as Caesar, and, notwithstanding the prayers as well as arguments of Galerius, exacted, the equal title of Augustus. For the first, and indeed for the last time, six emperors administered the Roman world. Although the memory of a recent war divided the empire into two great hostile powers, their fears and the fading authority of Galerius produced an apparent tranquility in the imperial government.

The last years of Galerius saw him keep the position of first among equals. He spent the rest of his time enjoying himself, and ordering some important public works, such as discharging into the Danube the superfluous waters of Lake Pelso, and cutting down the immense forests around it. 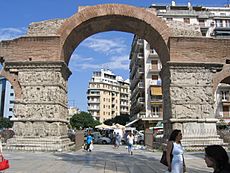 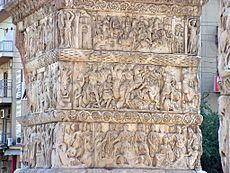 Detail of the Arch of Galerius in Thessaloniki.

Christians had lived in peace during most of the rule of Diocletian. The persecutions that began with an edict of 24 February 303, were credited by Christians to the influence of Galerius. Christian houses of assembly were destroyed, for fear of secret gatherings.

But in April 311 he issued the general edict of toleration, from Nicomedia in his own name and in those of Licinius and Constantine. This marked the end of official persecution of Christians. Galerius died on 5 May, 311.

All content from Kiddle encyclopedia articles (including the article images and facts) can be freely used under Attribution-ShareAlike license, unless stated otherwise. Cite this article:
Galerius Facts for Kids. Kiddle Encyclopedia.