The 2016 presidential campaign of Hillary Clinton, the 67th Secretary of State, former First Lady, and former United States Senator from New York, was announced via a YouTube video on April 12, 2015. A presidential candidate in 2008, her candidacy in the 2016 election is her second bid for the presidency. She was widely seen as the front runner for the Democratic nomination, although she faced several challengers, especially Bernie Sanders.

On November 9, 2016, after the presidential election, Hillary Clinton had lost to Donald Trump at the U.S. Electoral College. 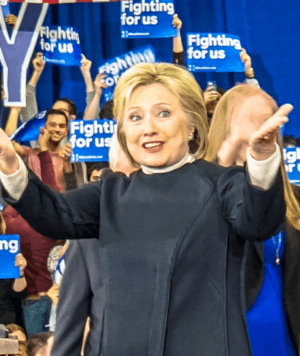 Hillary Clinton at the 2016 Democratic primary in New Hampshire.

According to nationwide opinion polls in early 2015, Clinton was the front-runner for the 2016 Democratic presidential nomination. She did face other several primary election challengers. A Franklin Pierce University/Boston Herald poll in mid-August 2015 showed Senator Bernie Sanders with a 44-37 lead over Clinton in the first-in-the-nation primary state of New Hampshire. And, in August 2015, Vice President Joe Biden was reported to be seriously considering a possible challenge to Clinton.

The Clinton campaign had planned a delayed announcement, possibly as late as July 2015. Her team decided to make the announcement earlier because of publicity about Clinton's use of a private email server while Secretary of State. Clinton made her official announcement on the following Sunday, April 12, 2015.

All content from Kiddle encyclopedia articles (including the article images and facts) can be freely used under Attribution-ShareAlike license, unless stated otherwise. Cite this article:
Hillary Clinton presidential campaign, 2016 Facts for Kids. Kiddle Encyclopedia.