Timothy Michael "Tim" Kaine (born February 26, 1958) is an American politician. He is serving as the junior United States Senator from Virginia. A member of the Democratic Party, Kaine was first elected to the Senate in 2012.

Kaine declared his candidacy for Governor of Virginia in 2005 in a bid to replace Mark Warner (who was constitutionally unable from serving another term. Kaine won in an uncontested Democratic primary, and faced Republican Attorney General Jerry Kilgore in the general election. Kaine won with 51% of the vote, to Kilgore's 46%. Kaine served as governor from 2006 to 2010. After becoming governor, Kaine gave the Democratic response to the 2006 State of the Union Address. He later became the 51st Chairman of the Democratic National Committee, serving from 2009 to 2011.

In 2012, after incumbent Senator Jim Webb announced he would retire, Kaine declared his candidacy for the U.S. Senate. Kaine won in the Democratic primary and faced former Senator and Virginia Governor George Allen in the general election. In the November 2012 election, Kaine won with 53% of the vote to Allen's 47%.

On July 22, 2016, he was picked to be Hillary Clinton's running mate for the 2016 presidential election. 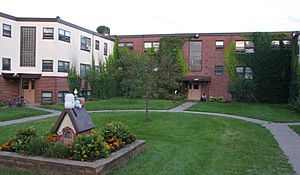 The place the Kaine family lived when he was born

Kaine received his B.A. in economics from the University of Missouri in 1979. Kaine was a Coro Foundation fellow in Kansas City in 1978. He then attended Harvard Law School. He took a break during law school to work with the Jesuit Volunteer Corps in Honduras. Kaine worked in Honduras for nine months from 1980 to 1981.

Kaine graduated from Harvard Law School with a law degree in 1983, and was admitted to the Virginia Bar in 1984.

Kaine practiced law in Richmond for 17 years, specializing in fair housing law and representing clients discriminated against on the basis of race or disability. Kaine was an adjunct professor for University of Richmond Law School for six years.

In May 1994, Kaine was elected to the city council of the independent city of Richmond, from the City's 2nd District. He served four terms on the council.

n July 1998, Kaine was elected mayor of Richmond, Virginia. He replaced Larry Chavis. He was chosen by a majority-black City Council, becoming the city's first white mayor in more than ten years.

Kaine voted against to tax increases, and supported a tax abatement program for renovated buildings, which was credited for a housing-renovation boom in the city. Richmond was named one of "the 10 best cities in America to do business" by Forbes magazine during Kaine's term.

During his tenure as mayor, Kaine drew criticism for spending $6,000 in public funds on buses to the Million Mom March, an anti-gun-violence rally in Washington, D.C.; after a backlash, Kaine raised the money privately and repaid the city. 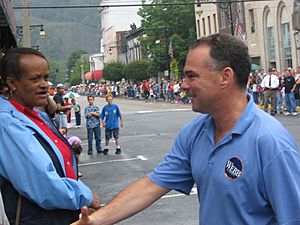 In 2005, Kaine ran for governor of Virginia against Republican candidate Jerry W. Kilgore, a former state attorney general. Two polls released in September 2005 showed Kaine loosing Kilgore—by four percentage points in a Washington Post poll and by one percentage point in a Mason-Dixon/Roanoke Times poll. The final opinion polls of the race before the November election showed Kaine slightly edging ahead of Kilgore. Kaine won, winning 1,025,942 votes (51.7%) to Kilgore's 912,327 (46.0%).

Kaine at the Smithsonian in 2006

Kaine was sworn in as governor at the colonial Capitol at Williamsburg, on January 14, 2006, the first governor since Thomas Jefferson to be inaugurated there. Kaine served as chairman of the Southern Governors' Association from 2008 to 2009.

As governor, Kaine successfully protected 400,000 acres (1,600 km2) of Virginia land from development, fulfilling a promise that he made in 2005. As governor, Kaine established the Climate Change Commission, a bipartisan panel to study climate change issues. In October 2006, Kaine signed an executive order banning smoking in all government buildings and state-owned cars as of January 1, 2007. He signed legislation banning smoking in restaurants and bars. It made Virginia the first Southern state to do so.

Kaine was governor during the Virginia Tech shootings.

As governor, Kaine approved about $3.31 billion in general fund spending cuts. In 2008, Kaine backed a $22 million proposal in the Virginia General Assembly to make pre-kindergarten education more accessible to at-risk four-year-olds. He left office with high polling numbers in January 2010.

As a member of the Senate Committee on Foreign Affairs, Kaine pushed for a new Congressional authorization of military force for the American operations against ISIL. Kaine supported the Joint Comprehensive Plan of Action with Iran, though he also helped Republican Senator Bob Corker hold a vote on a resolution of disapproval on the deal. Kaine undertook several trips throughout the Middle East, meeting with the leaders of states such as Turkey and Israel.

While in the Senate, Kaine has continued to teach part-time at the University of Richmond.

Kaine endorsed Hillary Clinton's presidential bid in 2016, and campaigned actively for Clinton in seven states during the primaries.

On July 22, 2016, he was picked to be Clinton's running mate for the election. The New York Times had said that Clinton's husband, former President Bill Clinton, privately supported Kaine as his wife's vice-presidential selection. Kaine is the first Virginian to serve on a major party's national ticket since John Tyler ran on the Whig ticket in the 1840 election.

Kaine is a Roman Catholic. In 1984, he married his wife Anne Holton, who is the current Virginia Secretary of Education since 2014. Together, they have three children.

All content from Kiddle encyclopedia articles (including the article images and facts) can be freely used under Attribution-ShareAlike license, unless stated otherwise. Cite this article:
Tim Kaine Facts for Kids. Kiddle Encyclopedia.