James Henry "Jim" Webb, Jr. (born February 9, 1946) is an American politician. He was a United States Senator from Virginia from 2007 to 2013. He is also an author and served as Secretary of the Navy from 1987 to 1988 under the Ronald Reagan administration. He is a member of the Democratic Party.

Webb announced on November 19, 2014 that he is forming a committee to run for President of the United States in 2016. On July 2, 2015, Webb announced that we will run for president in 2016. He suspended his campaign and withdrew from the election on October 20, 2015.

Webb was born in St. Joseph, Missouri. His father, James Henry Webb, served in the United States Air Force. His mother, Vera Lorraine Hodges, was a housewife. His family descended from Irish-Scots immigrants. Webb went to many schools in the U.S. and in England. He was raised in Bellevue, Nebraska. 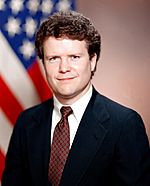 From 1977 to 1981, Webb worked on the staff of the House Committee on Veterans Affairs. During this time, he also represented veterans pro bono. Webb also taught at the Naval Academy and was criticized for a 1979 article published in the Washingtonian magazine titled "Women Can't Fight" (see "Senate Election" below).

During the Reagan Administration, Webb served as the nation's first Assistant Secretary of Defense for Reserve Affairs from 1984 to 1987.

During his time as Assistant Secretary, Webb sought to reorganize the Marine Corps. He was gravely concerned with the disarray the Marines had fallen into post-Vietnam: drug use, racial infighting, and low morale within the Corps left him with the impression it was no longer America's premier fighting force.

In 1987, he served as Secretary of the Navy, becoming the first Naval Academy graduate to serve as the civilian head of the Navy. As Navy Secretary, Webb pushed the appointment of Alfred M. Gray Jr. as Commandant of the Marine Corps, hoping that Gray could reshape the Corps into the elite unit it once was.

Webb resigned in 1988 after refusing to agree to reduce the size of the Navy. Webb had wished to increase the Navy to 600 ships. As revealed in The Reagan Diaries, President Ronald Reagan wrote on February 22, 1988: "I don't think Navy was sorry to see him go."

After his resignation, Webb earned his living primarily as an author and filmmaker. He won an Emmy Award for his 1983 PBS coverage of the U.S. Marines in Beirut.

On February 7, 2006, he announced that he would seek the Democratic nomination for the 2006 Senate race against incumbent Virginia Senator George Allen.

In the Democratic primary on June 13, 2006, Webb faced longtime businessman and lobbyist Harris Miller. Webb won with 53.5% of the vote, in a race with low turnout. On January 4, 2007, Webb was sworn into the 110th U.S. Senate, accompanied by Sen. John Warner, R-Va., a fellow former Secretary of the Navy; and former Virginia Democratic Sen. Chuck Robb, who held the same seat before losing to Allen. 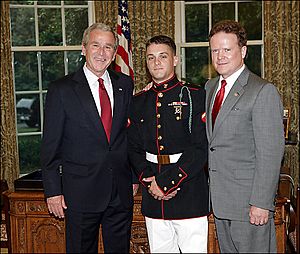 On January 23, 2007, Webb delivered the Democratic response to the President's State of the Union address, focusing on the economy and Iraq. Webb's speech drew positive reviews, and was regarded as one of the stronger State of the Union responses in recent memory. Webb, a decorated war veteran, spoke of his family’s military past, his own passionate attachment to the military, and the way in which previous presidents had always attempted to ensure that all precautions had been taken when sending young Americans into harm's way.

On August 14, 2009 Webb visited Myanmar (Burma), seeing its junta's leader, Gen. Than Shwe, and also the pro-democracy leader Aung San Suu Kyi, who was under house arrest. During Webb's visit with Than Shwe, Webb negotiated the release and deportation of an imprisoned American, John Yettaw.

On November 19, 2014, Webb announced the formation of an exploratory committee in preparation for a possible bid for the Democratic Party's nomination for President of the United States in 2016. He made the announcement via a video posted on his website, as well as on YouTube.

On June 15, 2015, Webb announced he would make a decision regarding a presidential bid by the end of the month. He made a formal announcement on July 2, 2015. He suspended his campaign and withdrew from the election on October 20, 2015.

All content from Kiddle encyclopedia articles (including the article images and facts) can be freely used under Attribution-ShareAlike license, unless stated otherwise. Cite this article:
Jim Webb Facts for Kids. Kiddle Encyclopedia.