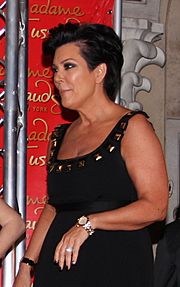 Kristen Mary "Kris" Jenner (born November 5, 1955) is an American television personality, writer, socialite, television producer and businesswoman. She is known for being the mother of Kim Kardashian, Khloé Kardashian, and Kourtney Kardashian.

Jenner was born Kristen Mary Houghton on November 5, 1955 in San Diego, California. She was married to Robert Kardashian from 1978 until they divorced in 1990. She has been married to Caitlyn Jenner since 1991. She has four children with Robert and two with Jenner. The Jenners announced their separation in October 2013, though they had actually separated a year earlier.

All content from Kiddle encyclopedia articles (including the article images and facts) can be freely used under Attribution-ShareAlike license, unless stated otherwise. Cite this article:
Kris Jenner Facts for Kids. Kiddle Encyclopedia.