Kids Encyclopedia Facts
This page is about the Manhattan district. For the "Meatpacking District" in Copenhagen, see Kødbyen.

The Meatpacking District is a neighborhood in the New York City borough of Manhattan that runs roughly from West 14th Street south to Horatio Street, and from the Hudson River east to Hudson Street, although recently it is sometimes considered to have extended north to West 17th Street and east to Eighth Avenue.

A Native American trading station called "Sapohanikan" was on the riverbank, which, accounting for landfill, was located about where Gansevoort Street meets Washington Street today. The footpath that led from Sapohanikan inland to the east became the foundation for Gansevoort Street, which by accident or design aligns, within one degree, to the spring and autumnal equinoxes. In recognition of this history, petitions were made to call the 14th Street Park "Saphohanikan Park" although it appears no formal recognition was given.

The earliest development of the area now known as the Meatpacking District came in the mid-19th century. Before that it was the location of Fort Gansevoort and of the upper extension of Greenwich Village, which had been a vacation spot until overtaken by the northward movement of New York City. The irregular street patterns in the area resulted from the clash of the Greenwich Village street system with that of the Commissioners' Plan of 1811, which sought to impose a regular grid on the undeveloped part of Manhattan island.

Construction of residences in the neighborhood – primarily rowhouses and town houses, some of which were later converted into tenements – began around 1840, primarily in the Greek Revival style which was prominent at the time. By mid-century, with Fort Gansevoort replaced by freight yards of the Hudson River Railroad, a neighborhood developed which was part heavy industry and part residential – a pattern which was more typical of an earlier period in the city's history but which was becoming less usual, as industry and residences began to be isolated in their own districts. In the western portion of the neighborhood, heavy industry such as iron works and a terra cotta manufacturer could be found, while lighter industry such as carpentry and woodworking, lumber yards, paint works, granite works and a plaster mill blended into the residential area. At the time of the Civil War the part of the district west of Ninth Avenue and Greenwich Street and above 10th Street was the location of numerous distilleries making turpentine and camphene, a lamp fuel.

When development began again after the war in the 1870s, the tenor of the neighborhood changed. Since it was no longer considered a desirable area to live in, construction of single-family residences was replaced with the building of multiple-family dwellings, and the continued internal industrialization increased. In addition an elevated railroad line had been constructed through the neighborhood along Ninth Avenue and Greenwich Street, completed in 1869. Additional development began in the 1880s when two new markets began operating in the area. On the old freight yards, the Gansevoort Market (originally the "Farmer's Market"), an open-air space for the buying and selling of regional produce started in 1879, and the West Washington Market, 10 brick buildings used for meat, poultry and dairy transactions, relocated to the river side of West Street in 1884. By 1900 the area was home to 250 slaughterhouses and packing plants, and by the 1920s what had been a neighborhood based on mixture of marketplaces became more tightly focused on meatpacking and related activities – although other industries continued to be located there, including cigar-making, transportation-related businesses such as automobile repair, express services and garages, import-export firms, marine supplies, cosmetics, printing and many others. After decades of debate, the High Line elevated freight line was authorized in 1929 as part of the "West Side Improvement Plan", and the New York Central Railroad completed construction, passing through the neighborhood, in 1934.

The area's decline began around the 1960s as part of the general decline of the waterfront area. Containerization of freight; the advent of supermarkets which changed the distribution pattern for meat, dairy and produce from a locally or regionally based system to a more national one; and the development of frozen foods and refrigerated trucks to deliver them were all factors in this, but meatpacking continued to be the major activity in the neighborhood through the 1970s. At the same time a new "industry", nightclubs and other entertainment and leisure operations catering to a gay clientele began to spring up in the area. 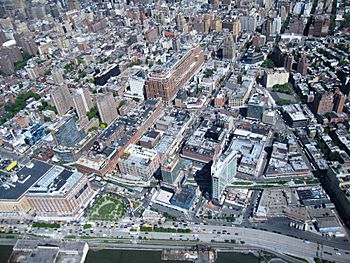 A catalyst for even greater transformation of the area was the opening in June 2009 of the first segment of the High Line linear park. A former elevated freight railroad built under the aegis of Robert Moses, it opened to great reviews in the District (and in Chelsea to the north) as a greenway modeled after Paris's Promenade Plantée. Thirteen months earlier, the Whitney Museum of American Art had announced that it would build a second, Renzo Piano-designed home at 99 Gansevoort Street, just west of Washington Street and adjacent to the southernmost entrance to the High Line; and on May 1, 2015, the museum opened at this site. These were turning points in the changes experienced by the neighborhood over the first two decades of the 21st century, transforming it from a gritty manufacturing district into a bustling high-end retail, dining, and residential area, as documented by photographer Brian Rose in his 2014 book “Metamorphosis.”

By 2003, out of 250 twentieth-century slaughterhouses and packing plants in the area, only 35 remained.

In September 2003, after three years of lobbying by the Greenwich Village Society for Historic Preservation (GVSHP) and its Save Gansevoort Market Task Force of neighbors and allies, the New York City Landmarks Preservation Commission (LPC) established the Gansevoort Market Historic District. The LPC granted only part of the group's request: the new district excluded the neighborhood's waterfront, and the restrictions associated with the designation did not apply to the 14-story luxury hotel (the Hotel Gansevoort) which opened in April 2004. In 2007 New York State Parks Commissioner Carol Ash approved adding the entire Meatpacking District, not just the city-designated Gansevoort Market Historic District, to the New York State and National Registers of Historic Places. The district was listed on the National Register on May 30, 2007 with 140 buildings, two structures, and one other site included.

Since the historic district was designated, threats to the “sense of place” meant to be preserved have continued to crop up. In 2004, GVSHP led a successful fight against a 450-foot-high proposed tower at 848 Washington Street, just over the district’s border, which would have been permitted by a change in Department of Buildings policy. In 2009, developers proposed a glass-walled office tower and retail space for 437 West 13th Street that was larger than zoning allowed. GVSHP strongly opposed the project, as the sense of openness in the area would be diminished and the low-scale character of the neighborhood would be eroded. In the end, the developers were not granted all of the variances that they had hoped for, but a glass tower will be built. In 2013 the New York City Council approved a plan to dramatically increase the size of the Chelsea Market complex — outside the Historic District, but within the National Register District — without sufficiently protecting its unique retail character, over the opposition of GVSHP and neighborhood allies. In 2014, however — in line with the repeated requests of GVSHP and other advocates — the city’s Board of Standards and Appeals denied a developer’s application for zoning variances to make a planned large building at 40-56 Tenth Avenue (between 13th and 14th Streets) even larger. One visible traditional feature that still remains are streets paved with Belgian blocks, often referred to, erroneously, as "cobblestones".

All content from Kiddle encyclopedia articles (including the article images and facts) can be freely used under Attribution-ShareAlike license, unless stated otherwise. Cite this article:
Meatpacking District, Manhattan Facts for Kids. Kiddle Encyclopedia.