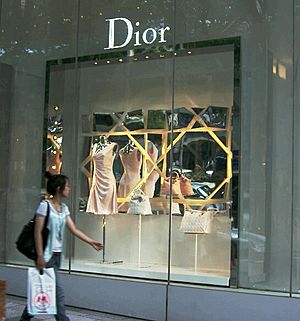 A boutique is a small shopping outlet, especially one that specializes in elite and fashionable items such as clothing and jewellery. The word is French for "shop".

"Boutique" was an everyday English word in the late 1960s when, for a brief period, Swinging London was the centre of the fashion trade. Carnaby Street and the Kings Road were the focus of much media attention as the most fashionable boutiques of the era were there.

Today, boutique may refer to a specialised firm, such as a boutique investment bank or boutique law firm. The word is often used to describe small private hotels, to distinguish them from larger chains (such as Hilton Hotels). In such cases the term suggest their operation is elite and highly specialised.

In the strictest sense of the word, boutiques would be one-of-a-kind but some chains are referred to as boutiques if they specialize in particular styles.

Recently, the term "boutique" has started being applied to normally-mass-market items that are either niche or produced in intentionally small numbers at very high prices. This may be referred to as boutique manufacturing. For example, a Time Magazine article suggested that Nintendo could become a "boutique video-game company", producing games for niche audiences, rather than trying to compete directly with Microsoft and Sony.

All content from Kiddle encyclopedia articles (including the article images and facts) can be freely used under Attribution-ShareAlike license, unless stated otherwise. Cite this article:
Boutique Facts for Kids. Kiddle Encyclopedia.