The Illinois Holocaust Museum and Education Center is a museum located in Skokie, Illinois, near Chicago.

Its mission statement is to "Remember the Past" and "Transform the Future" and to preserve the legacy of the Holocaust by honoring the memories of those who were lost and by teaching universal lessons that combat hatred, prejudice and indifference. The Museum fulfills its mission through the exhibition, preservation and interpretation of its collections and through education programs and initiatives that foster the promotion of human rights and the elimination of genocide.

The Holocaust Memorial Foundation of Illinois, which runs the museum, began as a small storefront operation along Main Street in 1981. The foundation and small museum were established as a response to a Neo-Nazi group's attempt to march through Skokie, in which many Holocaust survivors had settled in the decades following the atrocities.

The new museum building opened to the public on April 19, 2009, in the attendance of keynote speaker Bill Clinton and special guest Elie Wiesel. President Barack Obama spoke through a recorded video message, as did Shimon Peres, president of Israel.

There are also volunteers from the Action Reconciliation Service for Peace and the Austrian Holocaust Memorial Service (since 2009) that work for the museum.

In 2017, the museum opened the Take a Stand Center. It became the first museum in the world to employ a new technology that allows visitors to interact with speaking holographic images of Holocaust survivors. Connected to the holograph theater is an exhibit concerning organizations and individuals that have promoted human rights including the Universal Declaration of Human Rights, and such figures as Ruby Bridges and Malala Yousafzai. 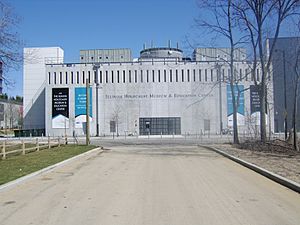 View of museum from the West 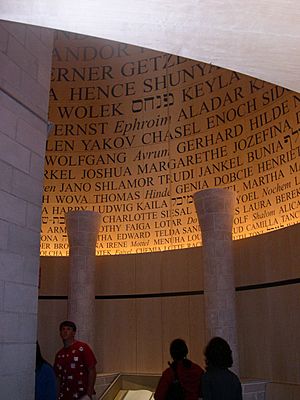 View of museum from the East

The building was designed by Stanley Tigerman. The Interior and Exhibition was co-designed by Yitzchak Mais, a former director of Yad Vashem. The Holocaust exhibition occupies the first floor, beside the auditorium, the main entrance hall, information and membership desks, coatroom, gift shop, and library.

The upper floor contains the remembrance areas, the art gallery, the upper part of the auditorium, and offices. The basement contains classrooms, an exhibition for children, an exhibition on the building's history, and a conference area.

The building's main front is divided into two halves. The black half includes the entrance doors and the white half includes the exit doors. Between the two halves of the main front, there are objects that resemble torches. The main front is located in a narrow alley with a small parking lot on its northeast side. A wooded slope separates the museum from the highway I-94. As a result, one cannot view the entire front from any place.

The museum is located in the northwest corner of Skokie, west of the Edens Expressway (I-94). The nearest exit is Old Orchard Road. To the east of the museum is also an abandoned railroad right of way. This right of way is considered for a new CTA Yellow Line extension, with a new terminal station in the proximity of the museum. The museum is already accessible through several bus lines nearby: CTA lines 205 and 54A, and Pace lines 208 and 422.

All content from Kiddle encyclopedia articles (including the article images and facts) can be freely used under Attribution-ShareAlike license, unless stated otherwise. Cite this article:
Illinois Holocaust Museum and Education Center Facts for Kids. Kiddle Encyclopedia.