Spertus Institute for Jewish Learning and Leadership facts for kids 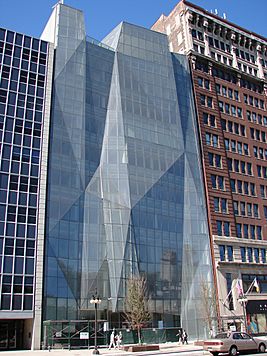 Spertus Institute for Jewish Learning and Leadership (Spertus College or Spertus) is a private educational center in Chicago, Illinois. Spertus offers learning opportunities that are "rooted in Jewish wisdom and culture and open to all" although it is not affiliated with any single branch of Judaism. Graduate programs and workshops "train leaders and engage individuals in exploration of Jewish life." Public programs include films, speakers, seminars, concerts, and exhibits — at the Institute’s main campus at 610 S. Michigan Avenue, as well as in the Chicago suburbs and online.

Spertus offers graduate degrees in Jewish Professional Studies, Jewish Studies, and until 2016, Nonprofit Management — accredited by North Central Association of Colleges and Schools — as well as professional workshops and a range of public educational and cultural programs.

The institute was founded in 1924 as Chicago's College of Jewish Studies.

In 1970, it was renamed Spertus College to honor donations made by entrepreneurs (and brothers) Maurice and Herman Spertus [ru].

Architecture of the Spertus Institute building

Like the surrounding buildings, many constructed in the period of architectural innovation that followed the Great Chicago Fire of 1871, this building is forward-looking in its design and use of materials, while maintaining respect for its setting. Like the bays of its 19th- and 20th-century neighbors, the facets that create the façade’s dynamic crystalline form allow light to extend into the narrow building, while expanding the views enjoyed from inside. The geometry of the façade is unique because the surface is constantly tilting in three dimensions, resulting in individual units of glass that are parallelograms rather than rectangles.[tone] At the same time, the average size of each of the façade's individual panes of glass is consistent with the standard size of the windows in the buildings up and down Michigan Avenue.

The Spertus building was the first new construction in the Historic Michigan Boulevard District after the area was designated a Chicago Landmark in 2002. The cost of the Spertus project was more than $50 million.

All content from Kiddle encyclopedia articles (including the article images and facts) can be freely used under Attribution-ShareAlike license, unless stated otherwise. Cite this article:
Spertus Institute for Jewish Learning and Leadership Facts for Kids. Kiddle Encyclopedia.