Ruth Bader Ginsburg (March 15, 1933 – September 18, 2020), also known by her initials RBG, was an American jurist who served as an associate justice of the Supreme Court of the United States from 1993 until her death in 2020. She was nominated by President Bill Clinton and was generally viewed as belonging to the liberal wing of the Court.

Ginsburg was the second woman to serve on the U.S. Supreme Court after Sandra Day O'Connor. Following O'Connor's retirement in 2006 and until Sonia Sotomayor joined the Court in 2009, she was the only female justice on the Supreme Court.

She died at her home in Washington, D.C., on September 18, 2020, from complications of metastatic pancreatic cancer, at age 87.

Ginsburg was born and grew up in Brooklyn, New York. Her older sister died when she was a baby.

At the age of four, Ruth attended Camp Che-Na-Wah, a Jewish summer program at Lake Balfour near Minerva, New York, where she was later a camp counselor until the age of eighteen.

Her mother wanted her daughter to get a good education, which she thought would allow Ruth to become a high school history teacher. Ruth attended James Madison High School.

She earned her bachelor's degree at Cornell University, and became a wife and mother before starting law school at Harvard, where she was one of the few women in her class.

Ginsburg transferred to Columbia Law School, where she graduated tied for first in her class. 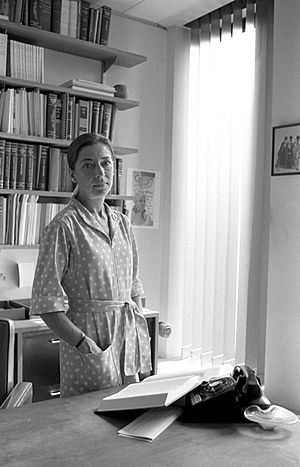 Ginsburg in 1977, photographed by Lynn Gilbert

She was a professor at Rutgers Law School and Columbia Law School, teaching civil procedure as one of the few women in her field.

Ginsburg spent a considerable part of her legal career as an advocate for the advancement of gender equality and women's rights, winning multiple arguments before the Supreme Court. She advocated as a volunteer attorney for the American Civil Liberties Union and was a member of its board of directors and one of its general counsels in the 1970s.

In 1980, President Jimmy Carter appointed her to the U.S. Court of Appeals for the District of Columbia Circuit, where she served until her appointment to the Supreme Court. Ginsburg received attention in American popular culture for her fiery liberal dissents and refusal to step down, leading to her being dubbed "The Notorious R.B.G.", a play on the name of rapper "The Notorious B.I.G." 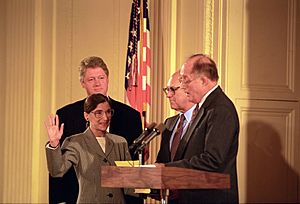 Chief Justice William Rehnquist swearing in Ginsburg as an Associate Justice of the Supreme Court, as her husband Martin Ginsburg and President Clinton watch

Ginsburg was appointed by President Bill Clinton and took the oath of office on August 10, 1993. She was the second female justice (after Sandra Day O'Connor) and the first Jewish female justice. Ginsburg was considered a member of the more liberal side of the Supreme Court.

When John Paul Stevens retired in 2010, Ginsburg became the oldest justice on the court at age 77. 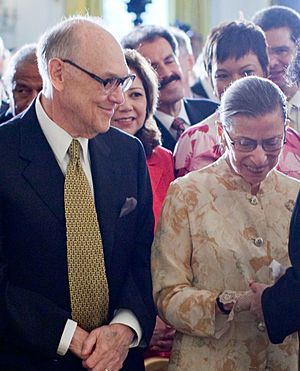 Martin and Ruth Ginsburg at a White House event, 2009

A few days after Bader graduated from Cornell, she married Martin D. Ginsburg, who later became an internationally prominent tax attorney practicing at Weil, Gotshal & Manges. Upon her accession to the D.C. Circuit, the couple moved from New York to Washington, D.C., where her husband became professor of law at Georgetown University Law Center. Their daughter, Jane C. Ginsburg (b. 1955), is a professor at Columbia Law School. Their son, James Steven Ginsburg (b. 1965), is the founder and president of Cedille Records, a classical music recording company based in Chicago, Illinois. Ginsburg was a grandmother of four.

After the birth of their daughter, her husband was diagnosed with cancer. During this period, Ginsburg attended class and took notes for both of them, typed her husband's dictated papers and cared for their daughter and her sick husband—all while making the Harvard Law Review. They celebrated their 56th wedding anniversary on June 23, 2010. Martin Ginsburg died of complications from metastatic cancer on June 27, 2010. 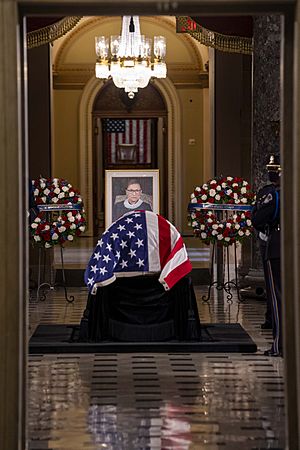 Ginsburg was honored in a ceremony in Statuary Hall, and she became the first woman to lie in state at the Capitol, September 25, 2020.

Ginsburg had surgery for colon cancer in 1999 and for pancreatic cancer in 2009. On November 8, 2018, she was hospitalized after fracturing three ribs in a fall.

On August 24, 2019, it was revealed that Ginsburg underwent radiation treatment for pancreatic cancer over the summer. In July 2020, she announced that she had liver cancer.

Ginsburg died from complications of pancreatic cancer on September 18, 2020, at age 87. She died on the eve of Rosh Hashanah, and according to Rabbi Richard Jacobs, "One of the themes of Rosh Hashanah suggest that very righteous people would die at the very end of the year because they were needed until the very end". After the announcement of her death, thousands of people gathered in front of the Supreme Court building to lay flowers, light candles, and leave messages.

Five days after her death, the eight Supreme Court justices, Ginsburg's children, and other family members held a private ceremony for Ginsburg in the court's great hall. Following the private ceremony, due to COVID-19 pandemic conditions prohibiting the usual lying in repose in the great hall, Ginsburg's casket was moved outdoors to the court's west portico so the public could pay respects. Thousands of mourners lined up to walk past the casket over the course of two days. After the two days in repose at the court, Ginsburg lay in state at the Capitol. She was the first woman and first Jew to lie in state therein. On September 29, Ginsburg was buried beside her husband in Arlington National Cemetery.

All content from Kiddle encyclopedia articles (including the article images and facts) can be freely used under Attribution-ShareAlike license, unless stated otherwise. Cite this article:
Ruth Bader Ginsburg Facts for Kids. Kiddle Encyclopedia.