Ginsburg was born in Brooklyn, New York to Evelyn (née Bayer) and Morris Ginsburg, a department store executive. He grew up in Rockville Centre, Long Island, where he attended South Side High School. His family was Jewish. Ginsburg earned a B.A. from Cornell University in 1953 and a J.D. (magna cum laude) from Harvard Law School in 1958. He was a star on Cornell's golf team. After finishing a year at law school, Ginsburg married Joan Ruth Bader in 1954, after her graduation from Cornell. That same year, Ginsburg, an ROTC officer in the Army Reserve, was called up for active duty and stationed at Fort Sill, Oklahoma. Ginsburg had an undergraduate training in chemistry. In 1956, he returned to law school, and his wife also entered Harvard Law School. During his third year at Harvard, Ginsburg endured two operations and radiation therapy to treat testicular cancer.

After graduating from law school in 1958, Ginsburg joined the firm Weil, Gotshal & Manges. He was subsequently admitted to the bar in New York in 1959 and in the District of Columbia in 1980.

In 1971, Ginsburg's firm represented Ross Perot in a business matter, and the two men became close friends. After President Jimmy Carter nominated his wife to the U.S. Court of Appeals for the District of Columbia Circuit in 1980, Ginsburg reached out to Perot and other influential friends to assure her Senate confirmation. In 1984, Ginsburg resolved complex tax questions that threatened General Motors's acquisition of Perot's Electronic Data Systems. In 1986, Perot endowed the Martin Ginsburg chair in taxation at Georgetown, although Ginsburg himself never held this seat. 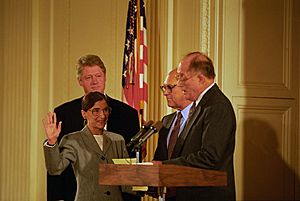 Ginsburg and President Bill Clinton look on as Ruth Bader Ginsburg is sworn in as an Associate Justice of the Supreme Court by Chief Justice William Rehnquist (August 10, 1993)

Shortly after graduating from Cornell in 1954, Ginsburg married Ruth Bader on June 23. Ruth said she and Martin decided whatever profession they pursued, they would pursue it together. The couple chose law, and both studied at Harvard Law School.

They are the parents of Jane Carol Ginsburg (born 1955), and James Steven Ginsburg (born 1965). Martin often told people how he did not make Law Review at Harvard, and Ruth did, sharing how he was proud of her successes, even when they were above his own. However, as he was also very successful in his career as a tax attorney, the couple enjoyed supporting one another and maintaining balance. Ginsburg was quoted as saying, "We had nearly two whole years far from school, far from career pressures and far from relatives, to learn about each other and begin to build a life." They thrived in their own domains. As his lighthearted self, Martin liked to say he was very lucky to have gotten in on an incredible journey by marrying Ruth, on her pathway to the Supreme Court.

Martin David Ginsburg died from cancer on June 27, 2010. As a US Army Reserve ROTC officer, he was buried at Arlington National Cemetery. Following her death from pancreatic cancer in 2020, Justice Ginsburg was laid to rest in Arlington next to her husband.

All content from Kiddle encyclopedia articles (including the article images and facts) can be freely used under Attribution-ShareAlike license, unless stated otherwise. Cite this article:
Martin D. Ginsburg Facts for Kids. Kiddle Encyclopedia.