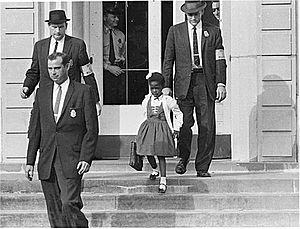 Ruby Nell Bridges Hall (born September 8, 1954) is an American activist. She is known for being the first black child to attend an all-white elementary school in the South. She went to William Frantz Elementary School.

Ruby Bridges was born in Tylertown, Mississippi, to Abon and Lucille Bridges. When she was 4 years old, the family moved to New Orleans, Louisiana. In 1960, when she was 6 years old, her parents allowed her to participate in the integration of the New Orleans school system.

In a 1954 decision, Brown v. Board of Education, the U.S. Supreme Court made Racial segregation against the law. Ruby was chosen to attend the all-white William Frantz Elementary School. The school board said that black children could attend the first grade if they passed a test. Bridges passed the test. On her first day of school, four U.S. Marshals had to go with her to school. Angry crowds of parents shouted threats at her. For the next six months, the marshals took her to and from her school. People tried to hurt her family. Her father lost his job and her grandparents were thrown off their farm in Georgia. Ruby never missed a day of school that year. The story of her going to a white school is the subject of a Norman Rockwell painting called The Problem We All Live With.

Ruby finished elementary school and graduated from high school. Bridges went on to become a travel agent for American Express. Mrs. Ruby Bridges Hall is married and has four sons. In 1999, she wrote a children's book, "Through My Eyes," telling her story. The same year she started the Ruby Bridges Foundation to promote "the values of tolerance, respect, and appreciation of all differences." She travels and talks to children all over the country.

On January 8, 2001, President Bill Clinton awarded Ruby Bridges the Presidential Citizens Medal. She was one of 28 to receive the medal that day. 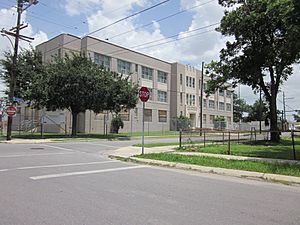 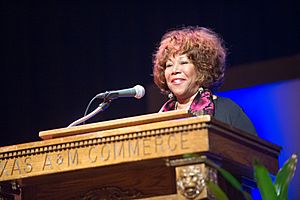 All content from Kiddle encyclopedia articles (including the article images and facts) can be freely used under Attribution-ShareAlike license, unless stated otherwise. Cite this article:
Ruby Bridges Facts for Kids. Kiddle Encyclopedia.